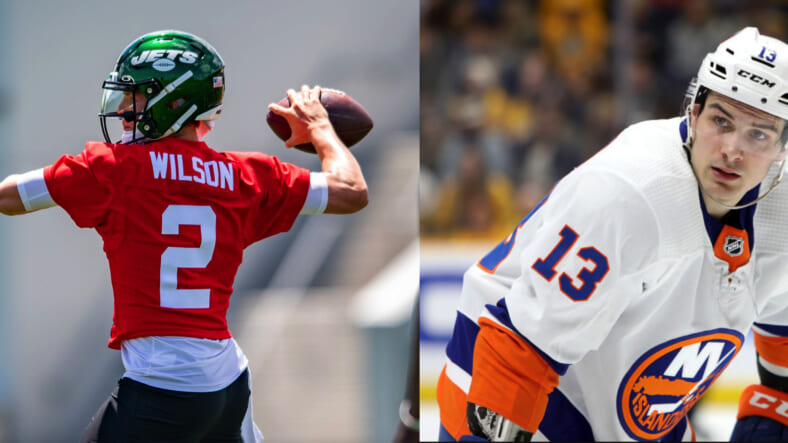 The New York Jets have been staples of the Islanders’ postseason tour on Long Island. Perhaps they can learn a thing or two along the way.

In following the New York Islanders’ run to the Stanley Cup Final, the New York Jets have traded in green and white for blue and orange. They’ve engaged in (Bud) light debauchery and have gone viral in the process as the Islanders are halfway through their quest for a fifth Stanley Cup hoist.

The next step of the journey begins on Sunday afternoon when the Islanders battle the defending champion Tampa Bay Lightning at Amalie Arena (3 p.m. ET, NBC). Nassau Coliseum will host the third, fourth, and (if necessary) sixth games of the series, and it’s very likely that members of the Jets will attempt to take their usual seats for those contests.Â

Is it possible that, in their fun, they might actually learn a thing or two along the way?

Class is in session, courtesy of ESM…

On Long Island:Â Save for Mathew Barzal (appearances in the last two exhibitions), the Islanders are not a team of perennial All-Stars. John Tavares’ absconding for Toronto was supposed to be their downfall, but they’ve responded with playoff series victories in three consecutive seasons while the Maple Leafs have been relegated to opening round exits.

The Islanders are a team that has gotten by with a group of gritty, skilled players whose union has worked wonders. Nothing showcases their depth and consistency better than the grouping of Casey Cizikas, Cal Clutterbuck, and Matt Martin, a trio of bottom-six forward staples since 2014. Nicknamed the “Identity Line”, NYI head coach Barry Trotz says that the group sets the tone for what they’re trying to accomplish on the ice.

“They give you impact. When they are playing the right way, they give you a little of that bite that you want,” Trotz said after a dominant January 2019 over Tampa, per Cory Wright of NewYorkIslanders.com. “They give you sort of that determination and speed on the puck and sort of an Islander identity. If there’s a line that’s sort of an identity line, well that’s the best way to describe them better than a fourth line because they give us an identity.”

In Florham Park:Â The Jets tried to go the big-spending route over the last few seasons, but marquee signings have not panned out. Right now, they’re actively paying Le’Veon Bell and Trumaine Johnson to keep their distance, for example.

Blessed with one of the highest offseason budgets in the NFL, it would’ve been easy for the Jets to fall to temptation and spend big money on a blockbuster talent (i.e. J.J. Watt). But once it became clear that the big names wanted to move on to contenders, the Jets bolstered their depth so more parts of the depth chart provide production and security.

This offseason has still seen some big contracts bestowed…Carl Lawson and Corey Davis are a combined $26 million cap hit…but many others signings have been about providing depth. They’re not the flashiest arrivals by any stretch, not the type of names that one can put on a parking lot light pole’s banner, but they’re the type of depth options the Jets needed at this point in time.

Jarrad Davis is a redemption-seeking first-round pick whose success in the 4-3 sets of the Florida Gators could come up big. At receiver, Davis is one of several names with the potential to become a No. 1 target. Denzel Mims and Jamison Crowder return from last year’s team, while Elijah Moore was drafted in the second round. Uncertainty lingers at tight end and in the secondary, but the Jets’ thriftiness could pay big dividends, as undrafted free agents Kenny Yeboah and Isaiah Dunn could come up big.

Make Sure Special Teams are Special

On Long Island:Â Since Trotz took over in 2018, the Islanders have improved by leaps and bounds in almost every major statistical category with the exception of their power play. New York ranked 20th in the final regulars season rankings with a man advantage, though they were the only team in the NHL that did not allow any shorthanded goals.

The Islanders, however, rose to the occasion on the penalty kill, coming home sixth in the category over the regular season. Doing it in the postseason has been a work in progress…they’ve killed off only 61.5 percent of their infractions…but the power play came to life in spectacular fashion in Monday’s Game 5 showdown in Boston. Facing a Bruins squad that led the league with an 86 percent kill rate during the regular season, the Islanders scored three power play goals that forever changed the course of the series. Barzal scored on a chance in the first period, while Kyle Palmieri and Jordan Eberle earned extra-man tallies in the second.

The power play success not only provided the difference in the goal category but more or less shifted the entire course of the game. Taking advantage of the opportunities allowed the Islanders to not only withstand a late Boston rush, but they were able to earn a momentum-shifting victory on a night where they were outshot 44-19.

In Florham Park:Â There’s major hope for the Jets entering the 2021 season, even if reaching the playoff is still a tall task for the time being. But there’s no doubt that they’re still developing, still a work in progress, particularly on an offensive end that’s debuting a new quarterback and receiving corps. Thus, special teams must be addressed.

Confidence for a developing offense can be built by getting points on as many drives that end in opposing territory as possible. That comes through reliable field goal kicking, an area where the Jets have fallen woefully short since Jason Myers left for Seattle. Chris Naggar has been brought in to compete with incumbent Sam Ficken for that role. General manager Joe Douglas has shown that he’s not afraid to use valuable assets to address special teams. He used the last pick of his first draft to pick up punter Braden Mann and has tried to fill in the Jets’ Andre Roberts-sized void at returned through additions in the 2021 draft (i.e. Michael Carter).

Perhaps the most telling sign of Jets management’s willingness to bolster the special unit came through the retaining of coordinator Brant Boyer, who has now survived the purges of both Todd Bowles and Adam Gase’s doomed staffs.

It All Starts at the Head

On Long Island:Â Again, no one expected the Islanders to be in his position three years ago. This, after all, was a team that just lost the face of its franchise, perhaps the one thing it had going for it since the immortal early 1980s.

The hire of Trotz in 2018, however, may go down as one of the most fateful moves in franchise history.

Trotz had already developed a reputation as a strong nurterer of young talent and helping woebegone franchises find their path. He put the Nashville Predators on the NHL map as the franchise’s original head coach (serving 16 seasons at the helm after their 1998 inception). He then moved on to Washington, where he helped the Capitals removed the playoff monkey from their backs. Only under Trotz has Alex Ovechkin been able to reach hockey Nirvana in the Stanley Cup Final.

Once Trotz was voted out of Capitol Hill due to a contract dispute, the Islanders pounced and have been reaping in the benefits ever since. Under Trotz, the Islanders have won playoff rounds in three consecutive seasons for the first time since their quartet of Cup hoists (1980-83). Trotz’s status as a players’ coach that is nonetheless willing to hold his guys accountable has been a delightful contrast to the recent slew of also-rans. Doug Weight’s animated style, for example, was refreshing when he first took the reins but it quickly ran its course.

Trotz credits his success to looking at his status as a head coach as not a position of superiority, but one that leads to a partnership with his players.

â€œI look at coaching, my time, as Iâ€™m in a partnership with the players,â€ Trotz told Mollie Walker of the New York Post in March. â€œWeâ€™re in a partnership to win hockey games. The other partnership is to make you the best version of yourself, whatever that version is.â€

In Florham Park:Â There’s no doubt that, despite the nine-win ledger, that the Jets had some talent on their roster over the last two seasons, better known as the Adam Gase era. Look no further than the names the Jets gave up on before him: Robby Anderson, Avery Williamson, Le’Veon Bell, and Steve McLendon accounted for only part of the list. But help has arrived in the form of Robert Saleh,Â  whose hiring has been universally praised.

The difference between the arrivals of Saleh and Gase are best contrasted by player reaction to the news. While Gase’s landing was met with mostly indifference…and whatever honeymoon there was quickly ended when he won a power struggle against Mike Maccagnan…Saleh’s arrival has been praised by players both domestically and abroad. It’s created an energy field in Florham Park not seen since, arguably, the Rex Ryan days.

“You have to give him an unusual amount of credit, and I donâ€™t think heâ€™s getting enough credit not only here but in the league, in general,â€ former Saleh pupil Richard Sherman said of his potential as a head coach in December, per the Associated Press. “He’s able to rally men. He’s a leader of men and that goes a long way.”

As the Gase era showcased all too well, talent means nothing when the right man isn’t in charge. Though vital downs have yet to be played, it’s safe to say the Jets feel that they have found the perfect curator and developer in Saleh.