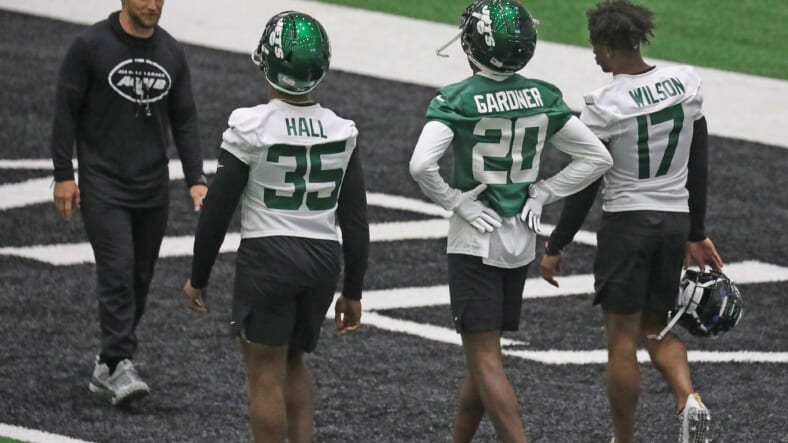 As the promising 2022 New York Jets rookie draft class reports to training camp today, most Jets fans have one holdup. Why is running back Breece Hall still not signed?

Based on a report from Dan Graziano of ESPN, luckily, it does not seem to be because of any bad business or offset language between the Jets and Hall’s agents.

Simply, it comes as a result of what happened with the selection made after Hall. With the 37th overall draft pick, the Houston Texans acquired defensive back Jalen Pitre. The rookie deal he got from the Texans included a fully-guaranteed salary in year three of his rookie contract in 2024. For reference, Hall’s draft selection of 36th just last year got 58% of the third year guaranteed on their contract.

With the fully-guaranteed third year, Pitre got, now the selections made ahead of him in the second round must get fully guaranteed salaries in 2024 as well. From there, the Jets, as well as the teams who picked from 33-35 (Tampa Bay, Green Bay, and Tennessee), are trying to determine how much of year four on the rookie contracts in 2025 should be guaranteed for these players.

Just last year, the Jets drafted Elijah Moore at the top of the second round with the 34th overall pick. He has no guaranteed money on the final year of his rookie contract in 2024. Clearly, the Jets, as well as the Buccaneers, Packers, and Titans, are all working through the same thing here.

Jets rookies are due to report today. RB Breece Hall is the only unsigned draft pick. He’s one of 11 unsigned second-round picks, including the three ahead of him. On Thursday, QBs + players recovering from injury report. #Jets

In terms of the fourth year Pitre got from the Texans, per Over The Cap, none of his salary is guaranteed in 2025.

At least this wait has nothing to do with bad business between the Jets and Hall’s agents. It simply comes as an unexpected approach from another team far out of the Jets’ control. Hopefully, the Jets can get Hall signed soon with the start of training camp on the horizon.