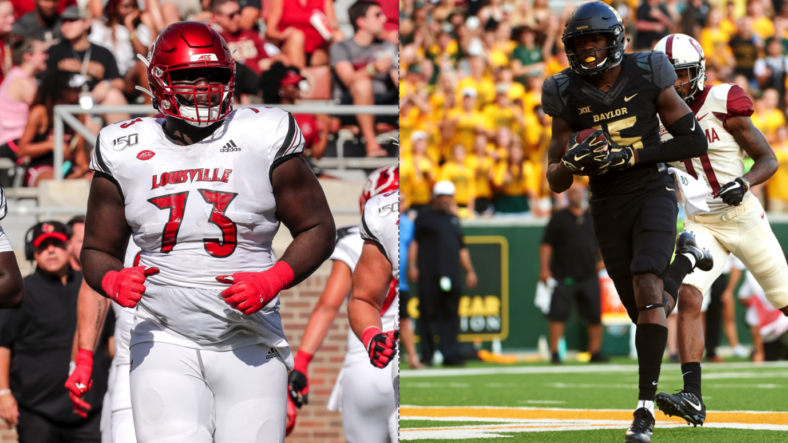 Mekhi Becton and Denzel Mims haven’t played a down with the New York Jets yet, but they’re set to play a major role on the team timeline.

Ah, the NFL Draft…host of the most inconsequential grade you’ll receive since your final semester of high school’s report card. At least back then, your bout of “Senioritis” would’ve featured activity that could be analyzed and calculated well enough to place a lettered grade upon it.

Even before live sports were put on hold, we have the sports-loving public have been fascinated by the concept of draft grades. These awards are bestowed months before the draftees will play a down, even weeks before they don the helmet of their choosers. That’s of no consequence to thoughtpieces across the nation, as prospects have their entire career decided for them in a blink of an eye (heck, this site is no exception). By this logic, Jalen Hurts should probably retire immediately.

But, in our world of endless, instant content demands, and draft grade pieces are certainly coming in more clutch than ever, whetting the appetite of we, the sports-loving people, famished of live content for tough but understandable reasons.

Of course, it’s hard to truly complain about immediate draft grades when high marks are attached to your team’s ledger. The jeers of Jets fans are a bigger part of draft lore than Mr. Irrelevant and hand-size comparisons combined. Even downsizing things to a virtual setting couldn’t silence the boobirds. But Joe Douglas’ first draft the general manager helm has earned positive reviews, particularly his choices at the top. Louisville blocker Mekhi Becton (chosen 11th overall) will provide protection for Sam Darnold and Le’Veon Bell. A surprise draft night tumbler, Baylor receiver Denzel Mims (picked 59th after a deal with Seattle) appears to be one of the biggest steals.

Time will tell if they, along with the rest of the sizable class, can live up to the rave reviews. But, for better or worse, Becton and Mims are already crucial landmarks on the Jets’ timeline.

It seems hypocritical, especially so after lampooning the concept of draft grades, to place such a judgment on this current crop of prospects, particularly the top two. Alas, it’s a weight placed on these top rookies by a demon that makes itself far too prevalent on draft day: forces beyond the rookies’ control.

The fates of these top picks have been written by the Jets’ latest fortunes. It is they who will be judged and relied upon to end the team’s postseason drought, which will reach a decade if they miss out this year.

Douglas’ opening stanzas have provided what feels like the most legitimate sense of hope in a long time. Jamal Adams’ future is uncertain, but, for now, he’s the face of the franchise. A duo of backfield saviors has emerged in Sam Darnold and Le’Veon Bell. To protect them, Douglas went on a shopping spree of offensive linemen, an area long neglected on his predecessor Mike Maccagnan’s watch.

Somehow, the ultimate judgment on what Douglas is trying to build is going to come down to how Becton and Mims perform.

Douglas’ free agency deals have come with a common theme: prove it. The Jets’ have inked 13 free agency contracts this season. Only one (Connor McGovern’s three-year, $27 million contract) features no potential out prior to 2022. Greg Van Roten and George Fant, for example, each got multi-year deals, but there are out clauses after the upcoming season.

Becton and Mims, however, are likely destined for four-year rookie deals. Not only will they have these lengthy contracts, but they’re both in a position to contribute immediately. Becton is going to be viewed as an anchor on the offensive line, especially if he’s set to shield Darnold’s blindside. Mims will be asked to contribute immediately with Robby Anderson gone.

A young New York resident was once told: with great power comes great responsibility. Such a resident was fictional, but the advice is all too real.

The depth of the receiver and blocking classes this season was potentially both a blessing and a curse for the Jets. They were able to get the men they wanted, but there’s major potential for second guessing. Did Mims fall for a reason? Will the Jets regret taking Becton instead of a receiver like Jerry Jeudy or CeeDee Lamb?

It’s these picks that can set the pace for the Darnold/Bell era. A Super Bowl is probably still out of reach in the immediate future, but these moves can build the team that makes the Jets attractive to championship talent. Hit these picks, and it’s the start of something big. Miss, and you’re right back where you started, albeit with all new faces filling the crucial positions.

Douglas went out this offseason and made plans for the team’s future. He, at least began, to make up for Maccagnan’s lost time on the line. With Anderson gone, he made the most out of a weak free agent class in Perriman once Amari Cooper re-upped with Dallas. But Becton and Mims, for better or worse, are going to be looked upon as the ultimate deciding factors. Some could even view them as finishing touches, depending on how optimistic the viewer is about the Jets’ either ending New England’s AFC East monopoly or nabbing the extra wild card spot.

It’s not entirely fair on either end. But that’s life in the NFL. The new semester has begun.