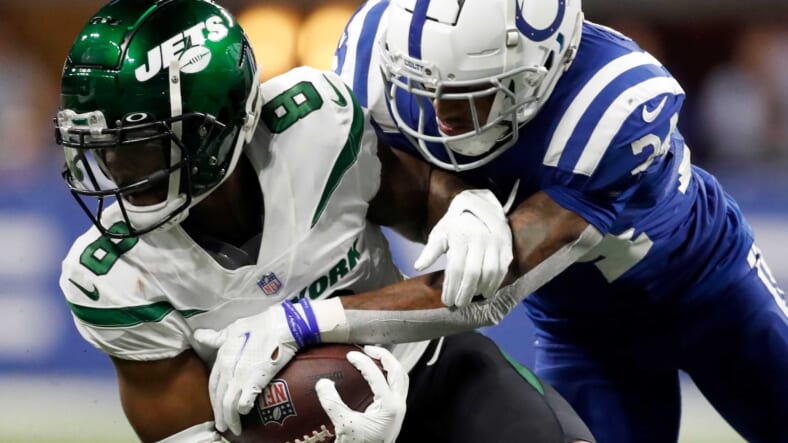 With Madden NFL 23 set to release in about a month, player ratings are starting to get released. Per EA.com, the New York Jets have 13 players with final ratings shared. The 13 players are all wide receivers and tight ends.

The ratings the Jets’ top six wide receivers got in Madden NFL 23 were:

All six players got speed grades of 90 or better. Davis got the 90. Moore, Wilson, Berrios, and Mims are all 92. Smith got the highest speed rating of 93. In terms of catch rating, no surprise, Moore got the best rating with an 88. Wilson got an impressive agility grade of 93. Moore and Wilson both got change of direction grades of 93. The best strength rating of the group went to the biggest receiver, Davis, as he got a 72. Davis also got the best route running grades of 81 in both the short and intermediate levels.

The tight ends of the Jets received the following ratings:

Conklin, who is well-known for having reliable hands catching the football, earned a great catch rating of 93, which put him eighth at the tight end position. An impressive improvement in comparison to what the Jets have had at tight end for some time.

Uzomah got a good speed grade of 83 and acceleration of 88. Ruckert and Wesco both got strength grades of 78. Ruckert also got the best run blocking grade of 65. Lastly, Uzomah also received solid ratings of spectacular catch (84), catch in traffic (81), and a release rating of 73.