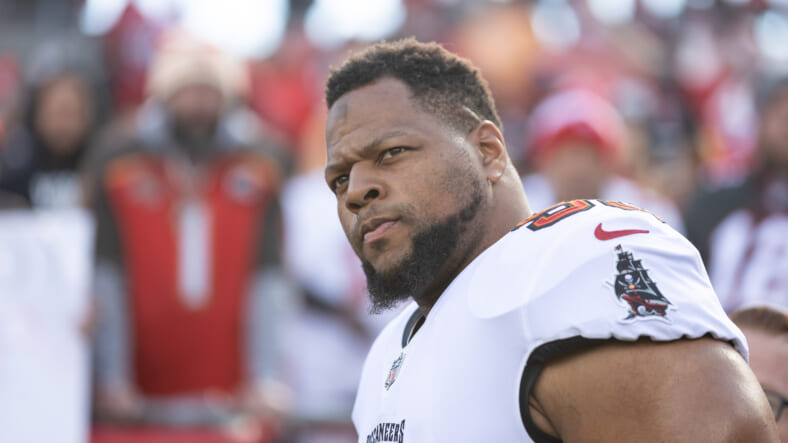 The run defense of the New York Jets struggled significantly throughout the 2021 season. They gave up 2,351 yards (138.3 per game) which ranked 29th.

This offseason, the team lost its best run-stopper, nose tackle Folorunso Fatukasi. The team did not spend a draft selection or acquire a veteran like Tim Settle, Harrison Phillips, or Derrick Nnadi to address this need.

Entering camp, stopping the run, in general, is likely a top concern of most Jets fans. Adding a big defensive tackle to fill space and make an impact against the run could pay huge dividends for the Jets’ defense.

Arguably the best option to fill this concern for the Jets is soon-to-be 13-year veteran Ndamukong Suh.

Suh has had some special durability. He has missed just two starts over his 12 years in the league to this point which were back in 2011. Every year of his career, Suh has recorded at least 717 snaps.

Suh would provide the size the Jets could use on the interior of their defensive line at 6-foot-4 and 313 pounds. The Jets need a bigger tackle who can easily fill gaps against the run.

While starting pass rushing talent and even depth are no concern for the Jets, Suh showed last year he can still help in that regard. He recorded six sacks and had 13 quarterback hits while playing the least amount of snaps in his long career.

The Jets are tight against the budget, and Suh may ultimately be interested in a more proven team later in his career. Nonetheless, if the Jets could add quality depth in Suh to their already talented defensive front, it could give them the help needed.