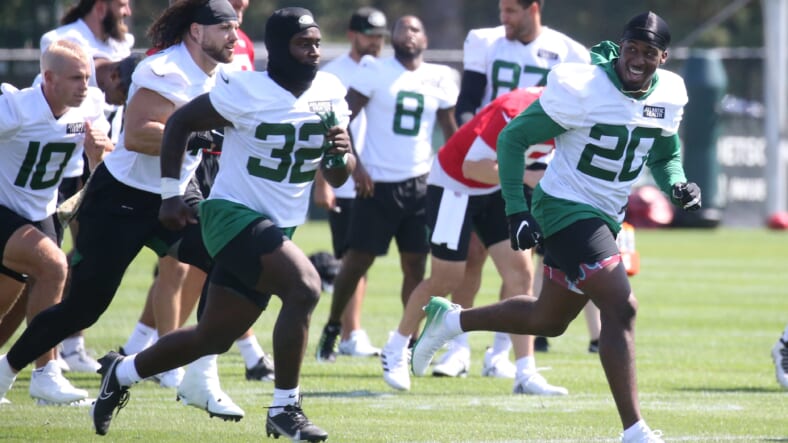 Training camp was officially underway for the 2022 New York Jets this morning. Some good news came early as it was announced that left tackle George Fant was placed on the active roster. He joined the other three players who were all removed from the Physically Unable to Perform list just yesterday, Mekhi Becton, Carl Lawson, and CJ Uzomah.

A final answer on who will be the Jets left tackle was finally provided. It was reported at the start of practice that Fant was at left tackle, and Becton moved to right tackle. After the conclusion of today’s practice, head coach Robert Saleh met with the media. He stated that Fant will be the left tackle and that there is no competition for it.

Players who shined on day one for the New York Jets:

During today’s practice, a few of the main stars were Zach Wilson, Denzel Mims, and DJ Reed.

With Mims, in particular, the hype continues to grow. It is very exciting to hear that the young 24-year-old wide receiver continues to impress. Mims can provide the Jets with strong and reliable depth at wide receiver, which is needed. He has all the physical and athletic talent with his combination of size and speed. Now, hopefully, he continues to build and mentally grow with his confidence.

Along with Saleh, multiple players were made available to the media following practice. Among them were Zach Wilson, Mekhi Becton, Jordan Whitehead, and Carl Lawson. Wilson talked about day-to-day improvement along with being smart and trusting his skilled teammates. On the move to right tackle, Becton said his goal is to “get on the field and play a full season… Whether it’s right or left, I don’t really care. As long as I’m on the five, on the field.”

On Lawson, coming back from an Achilles injury, Saleh stated that he looks great and has been prepared to go, “His work ethic… He was ready to practice in OTA’s. We have to protect Carl from Carl in terms of the amount of work that he’s going to do because he won’t stop unless we tell him to stop, so we’re excited to have him back.”