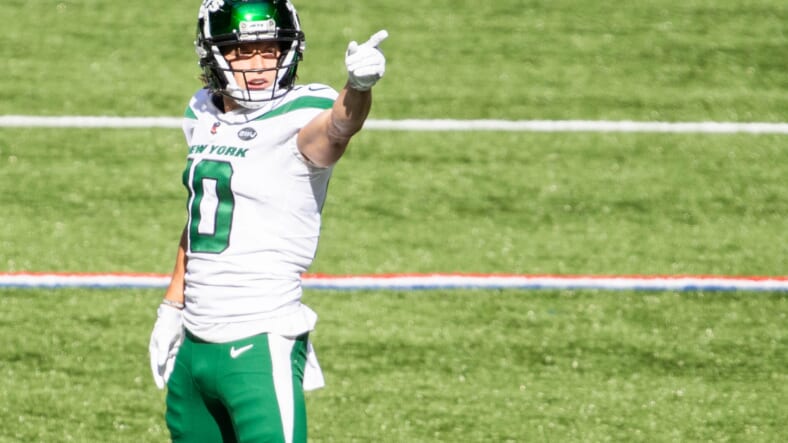 After re-signing this offseason, Braxton Berrios is one of the New York Jets’ longest-tenured players. Berrios is going into his fourth year with the Jets. Joe Douglas claimed him through waivers shortly before the start of the 2019 season. Each year Berrios has been a Jet, his role in the offense has grown, and he has continuously shown improvement. He has 41 kick returns and 46 punt returns through three years. Berrios averaged his best yards per return last season with 30.4 on kicks and 13.4 on punts. His kick return average led the league and resulted in first-team All-Pro honors.

Berrios is 26 years old and, as mentioned, has been a Jet for some time now. He was one of Douglas’ first additions as general manager, with Douglas being hired in the summer of 2019. That year, when Douglas took over, the Jets underachieved relative to expectations. In turn, Douglas fully committed to a rebuild in 2020. He traded the team’s Curtis Martin MVP of two years in a row, Jamal Adams, for two first-round picks. The following offseason, he dealt Sam Darnold for a second-round selection.

The Jets were one of the worst teams in football in 2020. Last year, they were the youngest roster in the NFL with a brand new coaching staff which led to obvious struggles.

Now, with two straight drafts filled with premium picks and back-to-back active free agency periods, the Jets are getting there, and Berrios sees it himself. Recently, he joined ESPN’s Adam Schefter on his podcast and spoke on his excitement about the team. Berrios said, “I can’t tell you how excited I am. Three years ago, we were in a completely different place.” It is great to hear and fair to be expected, considering Douglas’ commitment to the rebuild.

On the podcast, Berrios also spoke on his short time with the New England Patriots. He stated how he felt as if he got his “Ph.D. in football” while being there. On being released from the Patriots, Berrios went on to say, “looking back, it’s the best thing that ever happened to me. It felt like the back was against the wall there.”

On the current state of the Jets entering 2022, Berrios spoke optimistically about the youth. On his quarterback, Zach Wilson, Berrios said, “He’s in a different world than he was last OTAs.” With the active offseason the Jets accomplished, Berrios stated, “Then free agency, we signed a lot of veterans, a lot of high-level players. And then, obviously, our draft class from this year. We have everything that we need. It comes down to executing.”

The encouraging words from Berrios are great to hear. Ultimately, he is right on about simply executing. Douglas has built up a much better team of talent on paper. The Jets should be way more competitive starting this year.