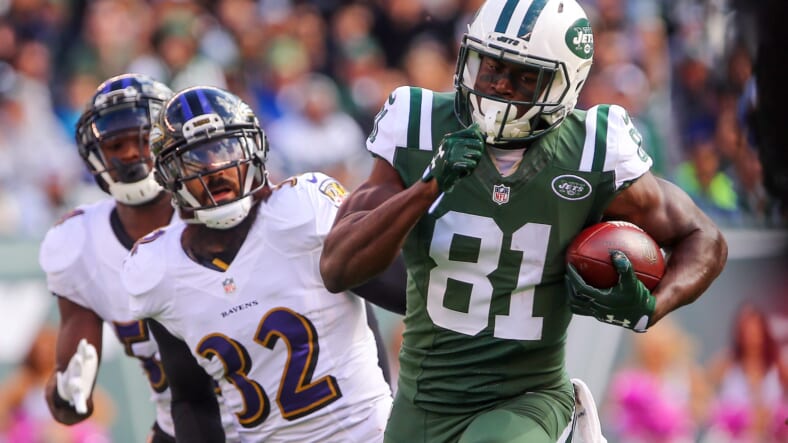 Oct 23, 2016; East Rutherford, NJ, USA; New York Jets wide receiver Quincy Enunwa (81) runs for a touchdown after catching a pass from Geno Smith (not shown) during the first half of their game against the Baltimore Ravens at MetLife Stadium. Mandatory Credit: Ed Mulholland-USA TODAY Sports

While the Jets did add veteran running back Frank Gore to the roster this week, they also waived four players and placed two more on injured reserve. Losing two depth pieces before training camp has even started is a hit to the team, and one of the players could be on his way out of the NFL after suffering multiple neck injuries.

Enunwa played just one game in 2019 before suffering a neck issue known as spinal stenosis. His last productive season was in 2018, where he logged 38 receptions for 449 yards and one touchdown. The 2016 season was his best, having earned 58 receptions, 857 yards, and four scores. However, his potential never blossomed in the way most believed it would, and now it seems as if he could be on his way out of the league entirely. At 27-years-old, Enunwa is still in physical shape, but neck injuries are extremely problematic for NFL players.

His 2020 salary of $6 million is fully guaranteed and will count $7.8 million against the cap. In 2021, he will earn $4.1 million of his $7.8 million guaranteed for injury. The former sixth-round pick will undoubtedly cash out before the Jets inevitably cut him.

Bellamy will miss the 2020 campaign with a shoulder injury. Bellamy has spent six years in the NFL, playing in only seven games last year with only two receptions for 20 yards. He had his most productive years with Chicago, but never really found a place as a starter in the league. He was simply a depth piece for the Jets, and now their wide receiver position is even thinner.

The Jets waived Moore on Tuesday with a non-football injury. At 20-years-old, Moore spent the entire 2019 season on the non-football injury list, and having failed to recover fully, the Jets made the ultimate decision to release him.

Brown failed a physical which ultimately force the Jets to wave him along with more. At 23-years-old, he was elevated from the practice squad and played in three games before suffering a quad injury. The injury must have been significant for him to require more time for recovery.

At 26-years-old, Tapper was waived by the Jets as well, posting a non-football injury.

Hatcher was signed to the practice squad for the final two games of the 2019 season with the Jets. He was also waived along with the three players mentioned above.