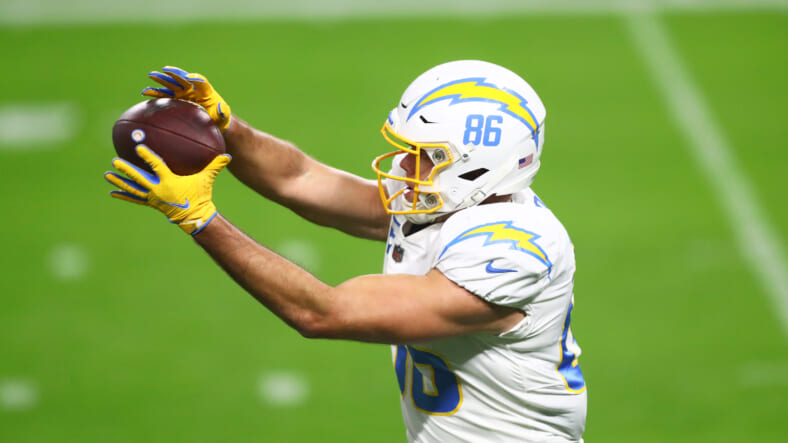 The New York Jets need help. They have a new coaching staff, which should help, but they need talent. Regardless of what happens at quarterback, because that decision is far from over, weapons have to be around whoever that is.

The Jets are reportedly interested in JuJu Smith-Schuster and Will Fuller V, but those wouldn’t necessarily be bold predictions. For one, Smith-Schuster going to the team seems to be a common one. However, there are some players who, even though they have a good chance of returning to where they played last season, could come over to play at Metlife Stadium.

With more than $62-million in cap space, the team can certainly make a splash. Here are two bold predictions for the use of that cap space:

Robinson is going to be the most coveted number-one receiver in free agency. This past season, with an underwhelming quarterbacking tandem of Nick Foles and Mitchell Trubisky, he posted 102 receptions for 1,250 yards and 6 touchdowns.

Robinson can do it all on the field. At 6-foot-2, 216 pounds, he certainly isn’t small. He can use his size and strength to win the tough catches and shield the ball from defenders. He’s a solid route runner and is smart after the catch. Along with his on-field skills, he’s someone that Denzel Mims can learn a lot from.

Also, at only 27 years old, he is still very well in his prime. He’s going to get offers – and a lot of them. However, the Jets can offer him the most appealing amount of money. I say “appealing” because only the Jaguars have more cap space, but I don’t see any scenario with him returning to Jacksonville.

So, the New York Jets will sign Allen Robinson II to a four-year, roughly $84-million deal.

Although they have Ryan Griffin and Chris Herndon on the roster, neither is the solidified option at tight end. Hunter Henry is proven to be a reliable and capable player at the position. Last season with the Chargers and rookie quarterback Justin Herbert, he totaled 60 receptions for 613 yards and 4 touchdowns.

Henry quickly became a favorite target for Herbert, and rightfully so. He’s explosive and consistently finds a way to be open. Also, he’s well-rounded – meaning he can catch and block effectively. Sam Darnold, or whoever is the quarterback, could desperately need that assistance. He’d be vital for anyone, especially if they draft a quarterback.

There’s a real good chance, however, that the Chargers franchise tag Henry again. If they do, he’ll be locked up. If not, he could walk. Recently, the latter seems increasingly likely. According to Sports Illustrated, the Chargers have joined the conversation in trading for Eagles tight end Zach Ertz. He could be the replacement in Los Angeles that allows Henry to come to Gang Green.

In this scenario, that trade happens. The New York Jets then sign Hunter Henry to a four-year, $48-million deal.

These bold signings would instantly bolster the Jets’ offense.