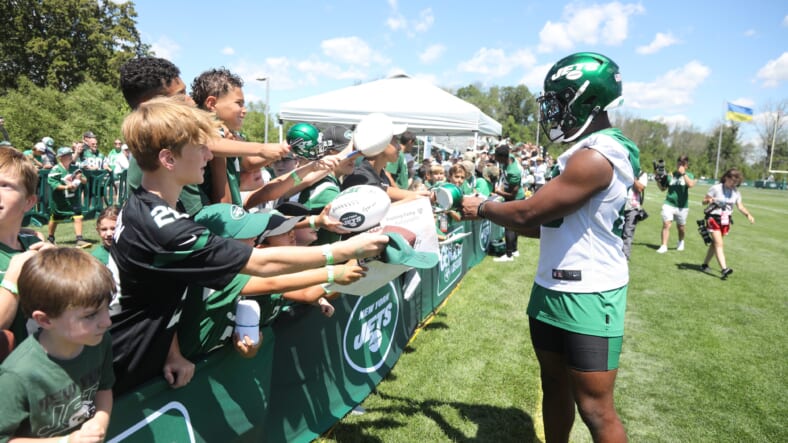 Robert Saleh stated in his press conference after practice that Jeremy Ruckert was continuing to show progress with his foot and could be cleared today. It was recently reported that Ruckert has been cleared for all football activities, great news for the Jets rookie tight end. Tevin Coleman was also activated to the roster.

After missing yesterday’s practice with an ankle injury, Michael Carter was fully back today. George Fant continued to progress today. He reportedly participated in three 11-on-11 series and should be good to fully return soon.

Stars of practice for the New York Jets:

For the second day in a row, on his 23rd birthday, Zach Wilson had another strong practice. He did not throw an incompletion. Wilson reportedly went 8-for-8 with a passing touchdown and two-point conversion. He threw the two-point conversion to Elijah Moore and the touchdown to Tyler Conklin. He spread the ball around to CJ Uzomah, Braxton Berrios, and Jeff Smith as well. Wilson looked accurate and had his best day of practice to date.

Moore continues to shine and lead the Jets’ passing attack. The strong summer for Quinnen Williams continued in today’s work. He had a sack early on in team periods. Rookie Jermaine Johnson also had a sack in practice today. Newly-signed linebacker Kwon Alexander supposedly had another good day for himself. He made a stop for a loss against the run early in 11-on-11 work. Alexander is already working alongside C.J. Mosley, with the Jets starting defense a week after being signed.

As stated above, Zuerlein did not practice today. Eddy Pineiro had a good day for himself. He went 3-for-4. His miss was from 55 yards. Pineiro did, however make a couple of kicks from over 50 today.

Following the conclusion of practice, along with Robert Saleh, Sheldon Rankins, Quincy Williams, and Alijah Vera-Tucker spoke with reporters.

On what Kwon Alexander has already added, Saleh stated, “I wasn’t expecting him to be in the shape he is. He’s in fantastic shape. He’s ready to roll, like I’ve said. He’s adding to the room. He’s definitely making it hard to keep him off the field.”

Rankins discussed how Quinnen Williams looks so far in camp, “He’s as good as I’ve seen him play since he’s been in the league. Even watching from afar and then obviously being his teammate last year. This is as good as he’s looked consistently.”

Quincy Williams spoke on the trio of himself, C.J. Mosley, and Kwon Alexander at linebacker, expressing optimism saying that it can be a “beautiful thing.” Vera-Tucker spoke on Mekhi Becton, stating that he’s “noticed improvement.” On the move to right guard, Vera-Tucker said, “It’s been going well, I enjoy it over there on that side. It’s a good transition for me. Overall, I’ve been doing well over there so far, it’s just keep on improving there’s always room for improvement”.