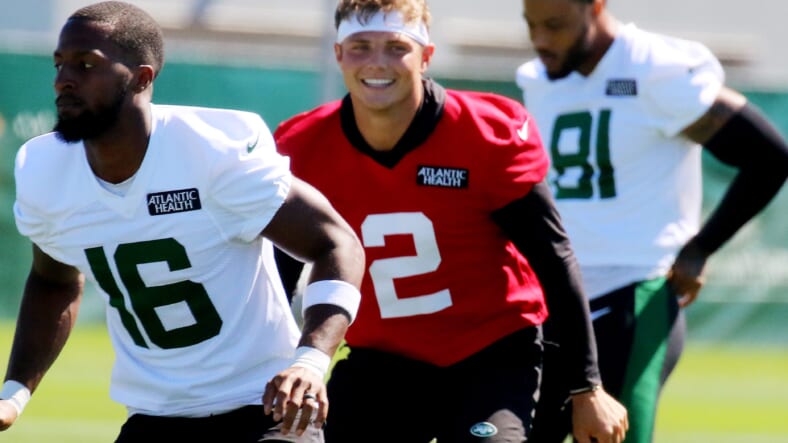 The New York Jets wrapped up their sixth practice of 2022 training camp Tuesday. It was the second padded practice and open to the public practice completed by the team this summer.

Tevin Coleman was activated off of the non-football injury list earlier today. He should be back practicing soon. George Fant took two reps in 11-on-11 work today, an indication of progress toward a full return. Michael Carter is day-to-day with a minor ankle injury. Vinny Curry has a slight hamstring and should be back later this week. There was no update on Jeremy Ruckert today.

The Jets offense had some players show out today. It was a good practice for Zach Wilson. He made some impressive throws both in and out of the pocket. He spread the football around to Elijah Moore, Garrett Wilson, Corey Davis, Braxton Berrios, Tyler Conklin, and CJ Uzomah between 7-on-7 and 11-on-11 work.

The electrifying, young one-two punch of Moore and Wilson was on display today. Both made some impressive catches. Moore made an impressive one-hand catch from the slot on a fade. Wilson seemed routinely open and thrived on the intermediate level. He went low to the ground to haul in one pass over the middle.

Another day, another @e_moore03 highlight.

Only one hand needed ? pic.twitter.com/3lsOVxltvJ

Denzel Mims made the most of his opportunities in the passing game today.

Breece Hall made an impressive catch on a vertical route down the seam in the 7-on-7 period. With no Michael Carter and Tevin Coleman, Ty Johnson was the backup to Hall today as he got some work with the starters. The fourth running back has been an unknown for the Jets, with Johnson, Zonovan Knight, and La’Mical Perine in the mix as well. Johnson may have an upper hand.

Defensively, Carl Lawson had yet another active practice getting after the quarterback. The Jets’ new-look cornerback duo of Sauce Gardner and DJ Reed had some great moments in one-on-one coverage situations today.

After today’s practice, the Jets had Robert Saleh along with Jacob Martin, C.J. Mosley, Bryce Hall, and Zach Wilson made available to the media.

Saleh spoke about Wilson and how his day went, “thought he did a really good job” and “overall, I thought it was a good day” for his second-year signal-caller.

On his new strong safety, Jordan Whitehead, Saleh had tremendous things to say, “His locker room presence, his voice on the football field… His instinct and reactionary skills post-snap, the juice and energy he brings. Home run, he’s phenomenal, so really excited that he’s here.”

Wilson on playing within the offense while utilizing his out-of-structure playmaking ability as well, “My biggest balance right now is how can I play within the offense. And then, find times to go and make something happen when it’s appropriate.”