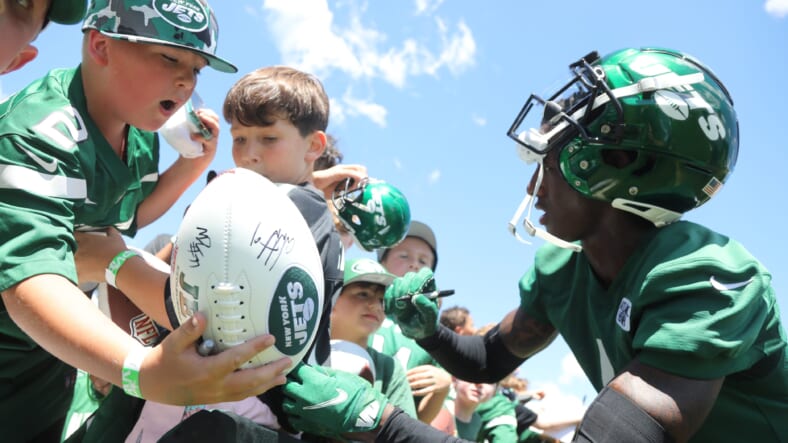 The first training camp practice with pads was completed by the New York Jets today. This was the fifth practice of camp for the Jets so far this summer.

The two players on the non-football injury list, Tevin Coleman and Jeremy Ruckert, were once again working on the side today. Robert Saleh stated after practice that Coleman is “close” and should be back this week. George Fant remained out of 11-on-11 work as the Jets await his return.

Newly-signed linebacker Kwon Alexander practiced with the team for the first time today. He reportedly had a good first practice and made some plays against the run. During his post-practice press conference, Saleh spoke highly of Alexander’s shape and smarts to come in and play right away for the Jets.

The early buzz in practice was the big connection between Zach Wilson and Elijah Moore. Wilson threw a great pass 50 yards in the air that Moore caught for a 70-yard touchdown. Moore seemed to have a big practice.

With Fant out, the Jets concerning offensive tackle depth was supposedly apparent today. Wilson did not have much time to throw. Some pressures came from Carl Lawson on the edge.

Backup quarterback Joe Flacco is having a strong training camp for himself. He made a few nice throws, leading the second-team offense down the field and eventually connecting with Jeff Smith on a one-yard touchdown.

Update on the kicking competition:

The Jets have an intriguing kicking battle that has not been discussed much yet throughout camp. Today, we got some updates. The successful veteran Greg Zuerlein went 4-for-4. Eddy Pineiro went 2-for-4 with misses from just 28 and 32 yards, obviously far from ideal.

Robert Saleh met with the media right after today’s practice. All three coordinators, Mike LaFleur, Jeff Ulbrich, and Brant Boyer, did as well. Kwon Alexander and Michael Carter II were the players who met with reporters following practice.

LaFleur spoke on Zach Wilson, Michael Carter, Denzel Mims, and Mekhi Becton. With Wilson from year one to year two, LaFleur said he sees differences. On how he handles pressure in his second year, LaFleur said, “I don’t think he’s having to think about the progression as much now. He’s just playing the position, and so when things break down, and he’s making decisions faster he can decide what’s best”.

LaFleur said he is “super pleased” with where Becton is at. On Mims, LaFleur spoke on his level of comfortability in the offense being greater. He stated that Mims has “made such great strides” and that he loves “the way he’s attacked it.” Lastly, LaFleur stated that he expects Carter to be one of the Jets’ leaders on offense “in all facets” this year, knowing the type of teammate he is.

Alexander made it known that he was between the Jets, New York Giants, and New Orleans Saints. On why he picked the Jets, Alexander stated, “I was familiar with the defense. Love Coach Saleh. Love the team. Love the guys they’ve brought in. I loved the energy they had. They got some dogs on the team. I wanted to come and be a part of it.”

Carter spoke on his development from year one to year two. On the rookie, Gardner, Carter stated, “From what I can tell, he’s having a lot of fun. You know, he’s built for it and he’s meant to be here. He asks a lot of questions and that just tells me that he’s not afraid to be wrong and learn from his mistakes. He goes out there and he executes, comes back, and is always willing to learn and get better. He’s getting better every day and I’m excited to see what he brings to our team this year. I know he’s gonna be special for sure.”