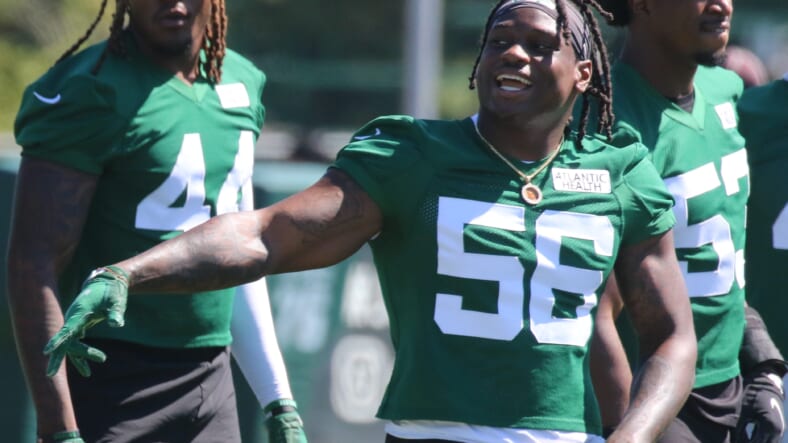 The 2022 New York Jets completed their fourth day of training camp Saturday early in the afternoon. It was the first practice of the summer fans were in attendance for. The Jets are off today and back at it again tomorrow, which will be the first padded practice of camp.

For the first time in training camp, Braxton Berrios practiced in 11-on-11 work. George Fant was still not back. Hopefully, he makes a return at some point this week. Lastly, Quinnen Williams left practice but is good per Robert Saleh.

New York Jets who shined in the fourth practice:

Once again, Breece Hall had a standout practice for the Jets. DJ Reed played well. He recorded an interception at the end of practice during the red zone work, which would have been a touchdown. Rookie Garrett Wilson showed some of his exciting ability in Saturday’s practice. His vertical jumping was on display on a few downfield passes. Also, he went low to make an impressive snag on a pass thrown over the middle.

Backup wide receivers Jeff Smith, undrafted rookie Irvin Charles, and recently acquired Rashard Davis all made some plays. Ty Johnson caught a few balls out of the backfield in space and had his terrific speed on display.

In the red zone period, Zach Wilson threw two touchdowns and one interception. He threw a nice pass to Jeff Smith and an accurate short pass over the middle in traffic to Tyler Conklin. Finally, Corey Davis made a great touchdown catch in the corner of the end zone near the end of practice.

Head coach Robert Saleh along with the Jets’ top four picks in the 2022 draft, Sauce Gardner, Garrett Wilson, Jermaine Johnson, and Breece Hall, were all made available to the media.

After a strong practice, Wilson spoke on his rapport with new quarterback Zach Wilson stating, “Yeah, I feel like it’s good. You know, we gotta keep building, but I feel like it’s good. Four days into camp I definitely feel like we’re at a good place but you want to see it keep picking up and you know that all comes with time, it all comes with time and reps so that’s what we’re gonna put in.”

Gardner, on what he sees his the young second-year single-caller, “he’s showing that he’s very confident.” He stated how Wilson gives an impression that “he’s arrived”. Gardner concluded on Wilson’s smarts and their communication, “We just make each other better. We get out on the field early, you know for practice, we just talk about certain things.”

With Jets fans at practice, the rookie Hall said on the Breece chant that, “it felt good to get it from a new fanbase.” Lastly, the trench player from this group, Johnson is ready for padded practices stating, “I’m definitely looking forward to it, 100%.”