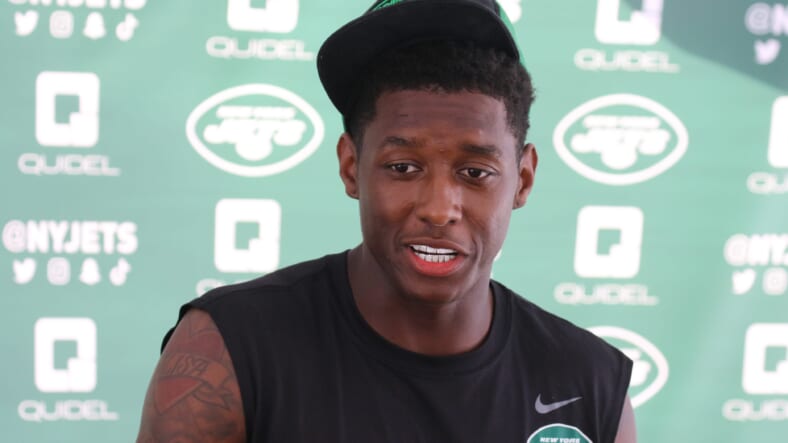 After getting the day off yesterday, the New York Jets completed their first practice of this week. The team finally has their first game week of the year with this Friday’s preseason game in Philadelphia.

The main news today was that starting right tackle Mekhi Becton left practice limping. Robert Saleh stated it does not seem too serious, good news for the Jets. DJ Reed, Ty Johnson, and Vinny Curry all remained out with hamstrings. Conor McDermott has a low ankle sprain and will miss a week or two.

Players who shined in practice:

The Jets’ offense had a few players with strong days of work. The connection between Zach Wilson and Tyler Conklin continued to show up. Conklin seems primed to have a productive 2022 for the Jets, his first year with the team.

Wilson had a relatively sharp practice. He went 9-for-12 and threw a touchdown during a move-the-ball period. His decision-making was good as he threw no interceptions. The defensive front of the Jets got in the backfield throughout practice. Wilson did some good things on the ground with his legs.

Wilson connected multiple times with Elijah Moore and Corey Davis as well. Davis scored one touchdown in the red zone on a slant. On one completion to Moore, Wilson displayed his mobility and pure arm talent. He moved up on an extended play, and with defenders around both him and Moore, he delivered the ball from a good angle and completed the pass accurately.

The pass rush of the Jets continued to make its presence felt. Between Quinnen Williams, Carl Lawson, Jermaine Johnson, Jacob Martin, Jabari Zuniga, and others, the Jets front had an impact throughout today’s practice. Johnson continues to show progress throughout camp. Martin has had some good rushes the last few days between the Green and White Scrimmage and today’s work.

Saleh discussed preseason action for the first team come Friday night. “So we’re planning on playing all our guys for about a series or two, so it’ll probably end up being a quarter. That’s for the first group.” It will be great to see the Jets starters get some work and hopefully execute well.

Davis spoke on the Jets’ top pick, Gardner, and his work ethic, stating, “He’s always one of the first guys out here and always one of the last to leave.” He also was asked about the improvement of Zach Wilson and had great things to say, “He’s getting more comfortable, getting more confidence out there… He looks good, taking charge of the huddle, he’s taken some real good steps.”