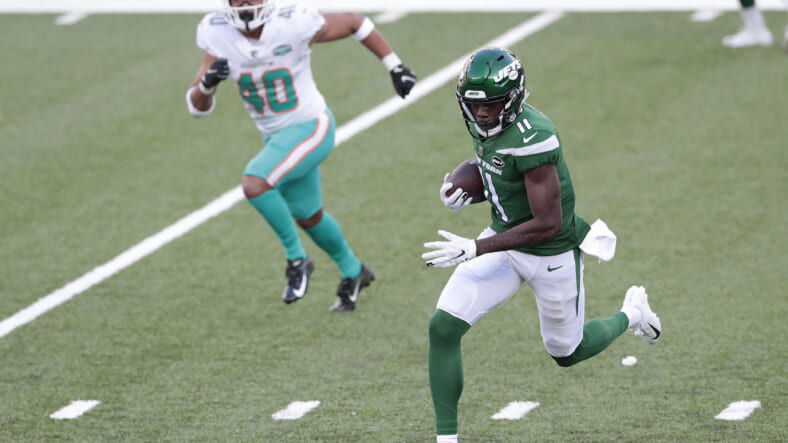 Sam Darnold returned to the field, but the New York Jets’ offensive spark did not, as they fell without a touchdown to the Miami Dolphins.

A relic of the New York Jets’ past put them one step closer toward their future.

Ryan Fitzpatrick threw for 257 yards and two touchdown passes, guiding his Miami Dolphins to a 20-3 victory over the Jets on Sunday at MetLife Stadium. New York (0-11) welcomed back Sam Darnold to their lineup, but he failed to keep the offensive progress rolling, throwing two interceptions and only 197 yards in defeat. Miami (7-4), on the other hand, kept pace in the AFC wild card hunt, staying a game behind Buffalo for the division lead and gaining ground on the fallen Las Vegas Raiders in the wild car chase.

ESM does have some game ball to dispense for the Jets, mostly coming from the defensive side of things after yet another defeat…

Denzel Mims is good. Pass it on.

The Jets’ future with Darnold looks a bit murky, but it’s abundantly clear that Mims has a bright future with this franchise. In the third of what could be dwindling opportunities with the current Jets thrower, Mims earned 67 yards on a quartet of receptions, the primary tally being a 30-yard gain that mostly consisted of yardage after the catch, a gain that brought the Jets out of the shadow of their own goalposts. If the Jets could earn Mims his first 100-yard day and his first NFL touchdown, that just might be enough to call this dreary final stretch a success.

A case against tanking comes in the form of Hewitt, who may be the type of player trying to impress both the Jets and other teams moving forward. Hewitt has risen to the occasion over the past three seasons as a reliable depth option, duplicating that process on Sunday against Miami. He gave the Jets some hope in the third quarter with a strip-sack of Fitzpatrick that situated the Jets in Miami territory. Hewitt has signed one-year deals with the Jets in each of the past two offseasons; he’s currently working his way toward a third…and possibly even longer.

Despite a year from the depths of the football underworld, Williams has taken a major step forward after a difficult season. He was perhaps in the Miami backfield more often than some Dolphin running backs on Sunday, earning a sack of Fitzpatrick and forcing a Matt Breida fumble that set up yet another failed opportunity for the offense. Williams also had a pair of pass breakups in defeat. Not only can the Jets be pleased with his development in a lost year, as Williams is one of the few Jets taking advantage of a season where there’s nothing to lose, but he’s starting to build a bit of a Pro Bowl case as well.

The Jets return to action next Sunday against the Las Vegas Raiders (1 p.m. ET, CBS).