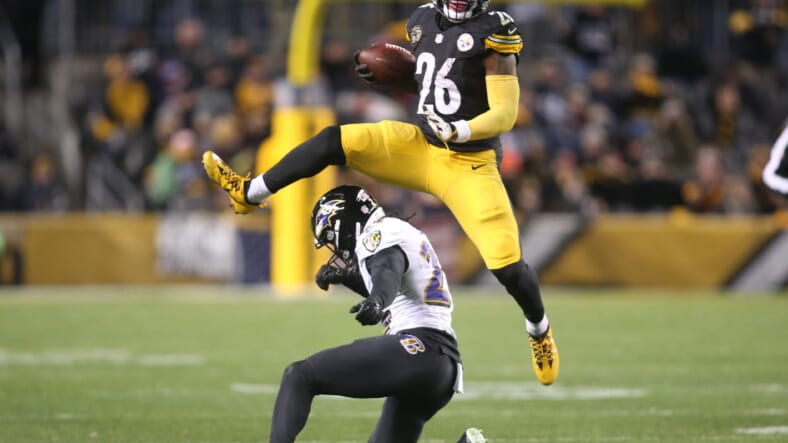 The New York Jets’ rushing attack was rolling downhill for the first 6-weeks of the 2018 season. In week 7 against the Vikings, Bilal Powell suffered a devastating injury that derailed his career.

In the penultimate game of the season, Isaiah Crowell sustained a foot injury that prevented him from returning to his former glory. Elijah McGuire and Trenton Cannon both showed some flashes of talent, but neither stood out as a pass-catching back.

All of this begs the question:

Is Leâ€™Veon Bell a Good Fit For the New York Jets?

Bellâ€™s numbers are otherworldly. When heâ€™s been on the field, heâ€™s averaged 86 yards on the ground and 43 yards through the air. If you added that to the Jets’ current offense, Sam Darnold could throw for 200 yards to his receivers, and not have to worry about anything else. Jets fans have been waiting for that situation since 2010.

Conversely, Bell brings a lot of baggage with him. Heâ€™s been suspended for the first 3 games of consecutive seasons, and heâ€™s missed 18 games in his career. Most notably, he held out the entirety of last year, and going a year without football takes a toll on a playerâ€™s overall athleticism.

What Will The Jets Have To Give Up?

That holdout actually hurt Bellâ€™s value more than anything. Last summer, he wanted quarterback money: rumored to be $30 million a year. The breakout of James Connor brought about questions if Leâ€™Veon is a â€˜systemâ€™ running back. Nobody denies that Bell is an elite receiver at running back. However, heâ€™s going to want Todd Gurley money, almost $15 million per year. Oddly enough, thatâ€™s only $500k more than his franchise tender last year.

Why Bell Should Not Be A Jet:

Leâ€™Veon Bell is a stellar talent with a poor attitude. This may be old-fashioned, but he does not put the team before himself. You can look past the holdout; the drug suspensions and the contract dispute went on for multiple years. The Jets brass dealt with Darrelle Revis in a sub-par manner, and he didnâ€™t even have any character issues. For a rebuilding team with a cornerstone, franchise quarterback, establishing the right culture in the locker room is imperative.