New York Jets: The case for (and against) a Sheldon Richardson reunion 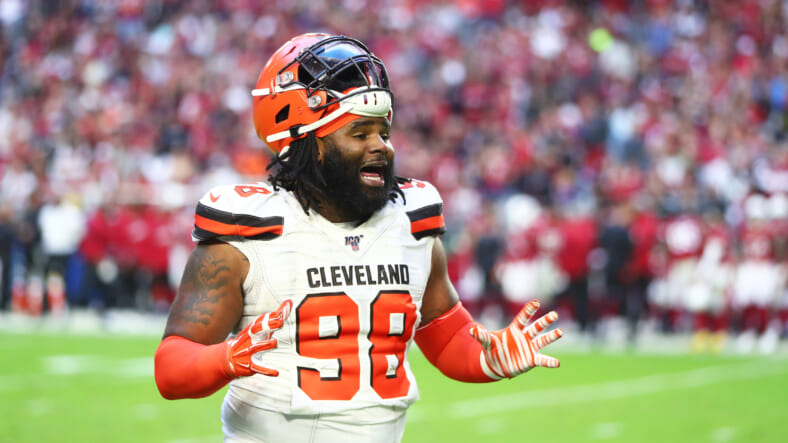 Former first-round draft pick Sheldon Richardson is back on the open market. Should the New York Jets stage a reunion?

As the New York Jets inch toward their future, a remnant of their not-so-distant past is seeking a new opportunity.

Sheldon Richardson, part of the last draft where the Jets had multiple first-round picks prior to next Thursday’s proceedings (8 p.m. ET, ESPN/ABC/NFL Network), hit the free agent market last Friday, released by the Cleveland Browns after two seasons. Richardson, 30, has spent the past four years in Seattle, Minnesota, and Cleveland after his Jets career ended with a trade to the Pacific Northwest prior to the 2017 campaign.

Should the Jets stage a reunion, allowing fans to break out their old No. 91 jerseys? ESM investigates…

Though Richardson never reached the heights he hit in New York, he still proved to be serviceable, especially in terms of pressure. His 12 quarterback hits (including two in Cleveland’s AFC Wild Card win in Pittsburgh) earned last season would’ve been the third-best tally on the 2020 Jets, behind Quinnen Williams and a tie between John Franklin-Myers and the departed Tarell Basham. Richardson also came up big during Cleveland’s crucial December win over Tennessee, picking up a game-changing fourth-and-one stop and later forcing a fumble from Derrick Henry. Both takedowns led to Browns touchdowns.

HisÂ continued contributions were no surprise to All-Pro Myles Garrett.

“He is a big-time player. That’s why he is here,” Garrett said of Richardson following a dominant defensive win over the Giants in December, per team video. “We see him do it time and time again, and I expect nothing less out of him.”

The Jets have been inspired by the play of their young front seven, particularly through Williams’ 2020 breakout. But with yearly dates with mobile threats Josh Allen looming indefinitely, they can use all the help they can get when it comes to invading the pocket.

New York management could also be interested in a Richardson reunion because of his recent endeavors in the 4-3. They haven’t run it as a primary defensive set since the Herm Edwards day but are expected to make a transition with previous practitioners Roberts Saleh and Jeff Ulbrich at the helm. Richardson struggled when the Jets employed the set during his earlier days (his 2014 Pro Bowl appearance came through his work in the 3-technique) but appeared to gain a new appreciation for it in Cleveland under defensive coordinator Joe Woods.

“The main part is being in the right place at the right time, and you’ll get all the production you’ll need,” Richardson said of Woods’ philosophies, per team reporter Anthony Poisal. “It’s D-line friendly. Everybody has an opportunity on the D-line to make plays without being wrong.”

The Jets are currently $24 million under the cap, the third-highest in the NFL (behind Jacksonville and Denver). While some of their neglected needs (offensive line) can be somewhat satisfied in the draft, they still need some veteran renovations. Picking up a veteran backup quarterback to both guide the incoming rookie and relieve him in case of an emergency should be on their spring checklist. The Jets could also use some veteran assistance in the secondary, which may be headlined by young projects Bless Austin and Bryce Hall.

One could argue that Richardson provides veteran mentorship to players like Williams, but the Jets have already brought in some experienced front seven options like Sheldon Rankins, Jarrad Davis, and Carl Lawson. The Jets have enough pressing needs as is. Do they really need to bring in a defender that’s already in his 30s? They already welcomed 32-year-old Vinny Curry to the fold. If they do wish to further remodel their front seven, their remaining offseason funds are perhaps better spent on younger projects.

Richardson’s price tag could also scare some teams away. One of the primary factors behind Richardson’s release was the creation of cap room ($11 million) to afford Jadeveon Clowney. With so many other pressing needs to fill, it would perhaps be wiser for the Jets to look elsewhere.

One also has to wonder if Richardson would even seek out a developing team like the Jets. He has plenty of talent left and could well be the “missing piece” for a team on the cusp of contention. Cleveland’s pair of playoff games in January were the first of Richardson’s NFL career. Granted a taste of postseason action, it’s certain he’s hungry for more. The Jets may have improved, but it wouldn’t be fair to anyone…even the Jets themselves…to call them playoff contenders just yet.

Any potential discussion around bringing Richardson in may soon be rendered null. Browns head coach Kevin Stefanski remarked that he “hope(s) that thereâ€™s a scenario” to bring Richardson back (per Browns Wire’s Jeff Risdon). Richardson also remarked in an Instagram post bearing the bad news that Cleveland was “starting to feel like home” after single-season stints in Seattle and Minnesota.

But, for better or worse, the Jets can’t afford to make Richardson a priority right. There are too many scary voids on this roster, ones that can’t fully be solved at the draft next weekend. If they can get Richardson back, maybe on a “hometown” discount of sorts, they should. But the more likely scenario probably has Richardson moving on to another contender.