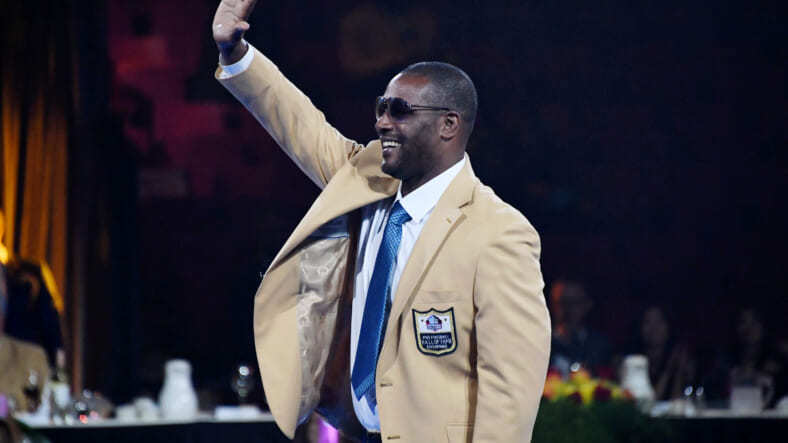 After Wild Card weekend, the New York Jets will pick 23rd in April’s draft, in addition to owning the No. 2 overall choice.

Jamal Adams apparently had one final parting gift for the New York Jets.

With Adams and the Seattle Seahawks falling to the Los Angeles Rams during the opening round of the 2020-21 NFL playoffs, the safety’s former comrades in New York will officially hold the 23rd overall pick in April’s NFL Draft. New York gained the pick in the trade that sent Adams out to the Pacific Northwest back in July. The Jets also hold the second overall pick in this spring’s selection proceedings and will also choose in Seattle’s slot in the 2022 draft thanks to the summer transaction.

With the selection solidified, who are some of the great names chosen at 23rd overall? ESM looks back…

George revolutionized defense in football, often credited as the first “middle” linebacker in the history of the game. His antics are also attributed to the creation of the 4-3 defense, which he used to his advantage to the tune of 18 interceptions during a 15-year NFL tenure. He was named to eight Pro Bowls and first-team All-Pro squads each and also guided the Bears to the 1963 NFL championship. George’s No. 61 is retired by the Bears and was also named to the NFL’s all-decade squad for the 1950s.

No matter what happened, Schafrath was probably going to leave an impact on Ohio sports. By the time his high school days were done, he was being actively recruited by the Cincinnati Reds baseball club and Woody Hayes’ Ohio State football program. Schafrath opted for the gridiron, developing a no-nonsese work ethic that earned him the nick name of “The Mule”. He went on to make seven Pro Bowl squad appearances and earn four first-team All-Pro nods over the course of his NFL career (1959-71) before entering politics in 1983. Schafrath would go on to serve over 14 years as a Republican State Senator in Ohio’s 19th District.

Choosing a punter with the 23rd overall pick seems like a ridiculous notion, but Guy lived up to his billing and then some over a 14-year career with the Raiders organization. He partook in 207 consecutive NFL games and landed 210 punts inside the opponents’ 20-yard-line since 1976 (when the NFL first started tracking such a stat). In 2014, Guy became the first exclusive punter (and first exclusive special teamer since Jan Stenerud) to be inducted into the Pro Football Hall of Fame. Today, the top honor to the best collegiate punter in the nation is known as the Ray Guy Award.

Though Newsome is perhaps better known for his exploits off the field through his endeavors as the Baltimore Ravens’ general manager and the Byron “Whizzer” White Man of the Year Award, he was one of the most dominant tight ends of the 1980s. Newsome remains the Browns’ all-time leader in receiving yardage (7,980) and receptions (662) and appears as the tight end of the Hall of Fame’s all-decade squad. He would go on to make history in 2002, serving as not only the first general manager of the Ravens but the first African-American in league history to hold the title. Baltimore has won two Super Bowl titles with Newsome in the front office, most recently in 2013.

The New Jersey native (Long Branch) had big shoes to fill in replacing former Super Bowl MVP Harvey Martin on America’s Team. He filled them in rather nicely, becoming a star attraction in some of the leanest years in Cowboys history. Once the team started to started to return to prominence upon the arrival of Troy Aikman and Emmitt Smith, Jeffcoat’s dominance rose to a national level, partaking in first two championships of the Dallas dynasty in the 1990s. Jeffcoat retired with 102.5 sacks, one of only 35 defenders to reach triple digits in the category in his NFL career.

Armstrong retired just before the Patriots’ dominance began, but he built a strong career as a reliable blocker. Over a 14-year career, Armstrong started all but 12 possible games in a New England uniform, making six Pro Bowls in the process (including one during the Patriots’ run to the Super Bowl in 1996-97). Though he was unable to earn a ring before departing, Armstring’s No. 78 is retired by the Patriots.

Law earned 59 interceptions in his NFL career, none of which were more important than his lone postseason touchdown. His interception of Kurt Warner came during the first-half proceedings of Super Bowl XXXVI, taking it back 47 yards to give the Patriots a lead they would never relinquish against the St. Louis Rams. That score kicked off the New England dynasty in earnest, setting off a streak of six Super Bowl titles over the next decade-plus. Law stuck around for two more of those championships and appears on both the 1990s and 2000s versions of the Patriots’ official all-decade squads. The defender included a brief tour of New York in his Hall of Fame career, earning a career-best 10 interceptions during the 2005 season.

Winfield bookended his rookie season by earning an interception of Peyton Manning in his first contest and ended it with a takeaway of Steve McNair during the AFC Wild Card playoffs in Tennessee. After five years with the declining Bills, Winfield made a strong name for himself in Minnesota, earning 22 interceptions and establishing himself as one of the hardest hitters in the league. By the time the 2000s ended, Winfield was one of four players to earn at least 600 tackles, 65 pass breakups, 15 interceptions, and 10 forced fumbles, a brotherhood that also featured Ray Lewis, Ronde Barber, and Keith Bulluck. Winfield would later be named one of the “50 Greatest Vikings” during the team’s 50th anniversary celebrations in 2010. His son, Antoine Jr., is currently in the midst of his rookie season with Tampa Bay.

Injury woes perhaps tragically denied us of the true Deuce McAllister experience. Originally called upon to pick up the Saints’ rushing pieces after the Ricky Williams misfire, McAllister topped 1,000 yards in four of his first six seasons, including a career-best 1,641 in 2003. But two torn ACLs over three seasons ended his career prematurely, forcing New Orleans to turn to the services of Reggie Bush. Though he sat out the entire 2009-10 season, the Saints remembered McAllister’s contributions to the team. He was signed shortly before the team’s Divisional playoff matchup en route to the Super Bowl, serving as the honorary captain for their win over Arizona. McAllister did not play but was allowed to retire with a championship ring when New Orleans won Super Bowl XLIV.