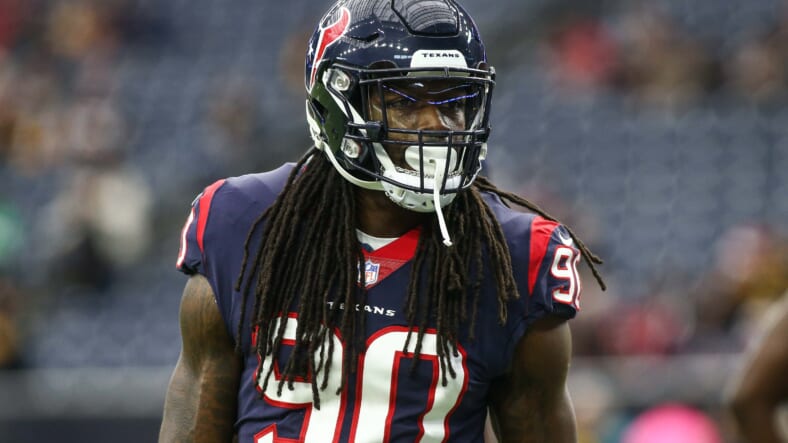 The amount of defensive talent that the New YorkÂ Jets have when healthy has the potential to be one of the elite units in the NFL. With young, formidable building blocks in star safety Jamal Adams, proven linebacker C.J. Mosley and the highly touted defensive tackle Quinnen Williams, coordinator Gregg Williams does have some pieces to work with.

With Mosley roaming the middle, Williams in the trenches and Adams to command the secondary, holes in the cornerback and pass rusher position are still critical when creating an efficient defensive unit.

So what’re some realistic moves for pass rushers? Options are still on the table for the Jets. With roughly $25 million in remaining cap, the Jets could still look to make a splash with a pass rusher.

Clowney is an interesting option for any pass rush needy team. There are a lot of questions surrounding him, but the payoff could be huge. Does he deserve top tier pass rusher money?

Can he be productive as a team’s number one pass rusher? Here are a couple of things to consider: Clowney has never posted a double-digit sack season, (that’s with spending five seasons in Houston with most of the attention of the opposing offensive lineman focused on teammate J.J. Watt). When he finally signed with the Seahawks last year with expectations to be their premier pass rusher, he recorded just three sacks with just seven tackles for loss in 13 games. Clowney is a freak athlete and a physical specimen with the potential to be a top-five pass rusher in football. I would like to see some more consistent production before giving him a big payday.

After announcing on his social media that he will be leaving the Vikings, Griffen is another intriguing option. He is a slightly safer option than Clowney. While he is five years older than Clowney at 32, he has a much more impressive resume.

Spending the last nine seasons with the Vikings, Griffen has posted 74.5 career sacks and 86 tackles for loss. After filling the big shoes of legendary defensive end Jared Allen, Griffen has been one of the premier pass rushers in the NFL. Could be brought in on a short term deal given his age and be an immediate impact player.

Ansah would be a low-risk signing. Nagging injuries have slowed his progress recently and posted only 2.5 sacks in the last 11 games with the Seahawks. Despite his lack of production in recent years, Ansah still draws attention from opposing offensive lineman because of his massive 6-5, 275-pound frame.

With a few impressive years with the Lions, including multiple double-digit sack seasons under his belt, Ansah could be brought in for cheap on a one-year prove-it deal. If he can stay healthy, the payoff for the Jets could be beneficial.