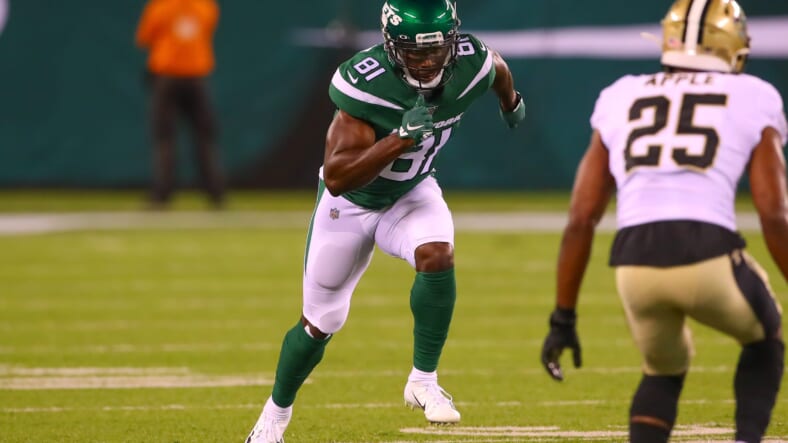 Another New York Jet has been released. Today, WR Quincy Enunwa joined veteran guard Brian Winters and others among those receiving their walking papers from Florham Park. After a severe neck injury hurt his highly anticipated year last season, Quincy Enunwa was shut down earlier this offseason. Now, the Jets decided to make the expected decision and release him.

What Happened To Enunwa

Enunwa had been a member of the organization since 2014. Alongside Winters, Enunwa was one of the longest-tenured Jets. The former 6th rounder out of Nebraska had all the physical capabilities in the world. He was a wide receiver in a tight endâ€™s body, with a running backâ€™s speed.

One could even say Enunwa had the most potential of the entire receiving corps at times while wearing the green and white. In his six years with the organization, Enunwa played in 41 games, had 119 receptions for 1,617 yards and 5 TDs.

Enunwa even played so well in 2018 that he earned a big deal from the former front-office regime. He was thought of as a building block, but that failed due to injuries.

Enunwaâ€™s biggest pitfall was his durability. In that six-year span, Enunwa only played in more than 12 games in a season once. When on the field, Enunwa was electric. His inability to stay healthy hurt his long term value to the team, which makes this move explainable.

His other issue, though came with Adam Gase. After explaining he couldnâ€™t attend his rehab, he was still fined for his missed appearance. This incident was made public by Enunwa and led to some bad blood within the organization. Which, almost certainly played a factor in the release.

For Enunwa, he will receive his $6M salary for 2020 since that was guaranteed. He also had a $4.1M injury guarantee for the 2021 season as part of the contract. So, the Jets will get no cap relief this year. Enunwa also has a tall task attempting to get back to football due to his chronic neck injury. Itâ€™s not an insurmountable task, but itâ€™s a long road that wonâ€™t go throughÂ  New Jersey.

As for the Jets, all eyes turn to the current receiving group to step up and make up for the losses of Robby Anderson and Enunwa, who just a year ago, were the teamsâ€™ top two receivers.Â