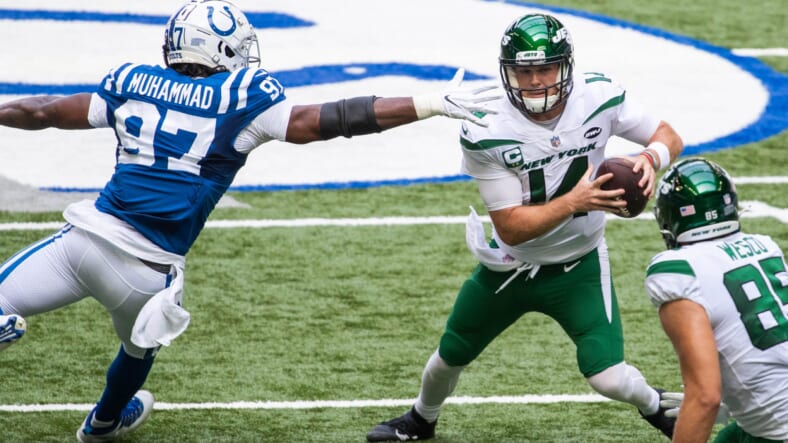 Eager for any kind of momentum, the New York Jets are hopeful that Sam Darnold can return to action on Sunday against Buffalo.

Back on the practice field for Bills week. https://t.co/QDCtHSw5QI

Sam Darnold was a limited participant in New York Jets’ practice on Wednesday, returning to fields at One Jets Drive for the first time since suffering a shoulder injury in an October 1 loss to Denver.

It’s unknown whether Darnold will be ready for Sunday’s rematch with the Buffalo Bills (1 p.m. ET, CBS), but that appears to be part of the Jets’ plans. Head coach Adam Gase described Darnold as being on a “pitch count” and that more clarity on his Week 7 status should emerge on Thursday.

“If there’s anything that lingers or anything where he’s throwing (in pain), that’s kind of his red flag of, ‘Hey, I have to let you guys know.’ We need him to be real honest,” Gase said, per Rich Cimini of ESPN. “If it’s a little less reps, I’ll be all right with that. He can handle that. If it was a second-year player behind Sam, I’d be a little more concerned.”

“Obviously, you give the priority to Sam in terms of the reps and things like that,” Flacco said about his preparation this week, according to transcripts from the Jets. “I just got to stay mentally locked in and make sure Iâ€™m going through as much of the week as I can like Iâ€™m going to play.”

Darnold has missed eight games due to injury or illness since taking over as the Jets’ quarterback in 2018. The Jets (0-6) have lost each of those games, including the last two with Flacco at the helm.

As the Jets desperately seek offensive momentum, they could be welcoming back not only Darnold, but rookie receiver Denzel Mims as well. The second-round pick out of Baylor has dealt with injuries all season, but may be poised for a return on Sunday.

“Mims had a great week of practice last week with the scout stuff that we had him doing,” Gase said, per Chris Ryan of NJ Advance Media. “This week, weâ€™ll get him involved in the normal offensive practice and, as long as we donâ€™t have any setbacks and nothing happens, injury-wise, for us itâ€™s the same thing with (Laâ€™mical) Perine. Letâ€™s get these guys in there, letâ€™s see what they can do, letâ€™s give him the ball, see if of these young guys can make some explosive plays.â€