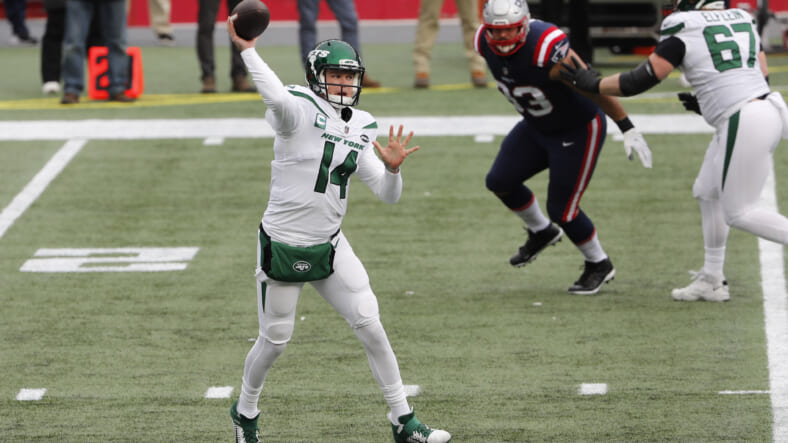 ESM opens its New York Jets offseason preview by pondering what they’ll do at the quarterback slot in 2021.

When will green smoke arise from One Jets Drive?

The New York Jets are once again pondering its future at the franchise quarterback slot, as a potentially turbulent stretch awaits. Many still have hope in the potential of Sam Darnold, but new regimes often bring sweeping changes to NFL franchises. The primary quarterback start is often the first spot to undergo a makeover. New York is in the second full year of Joe Douglas’ tenure as general manager, while Robert Saleh is ready to succeed Adam Gase as the head coach.

It’s easy to dismiss the struggles of Darnold as being trapped in a situation far from his own doing. In his three years at the helm, Darnold has eeked out flashes of brilliance despite endless waves of turmoil and turnover. To put things in perspective, only a single Darnold target from Darnold’s rookie season of 2018 was on the Jets roster in this past season, and that one outlier (fellow 2018 draftee Chris Herndon) hasn’t matched the promise shown in his debut campaign. The blocking wall in front of Darnold has seen more names flipped than the departures board at Grand Central Terminal. Long-term options in each spot have appeared to present themselves through Denzel Mims and Mekhi Becton respectively but with so many attractive names through both free agency and the draft presenting themselves, the temptation to start over might prove too great. Darnold’s early misfortunes when it comes to injuries also may not work in his favor, as he has yet to play a full NFL season.

In his opening statements as Jets head coach, Saleh praised Darnold repeatedly, noting the difficulty in scouting him when his former compatriots came to New York for a September tilt earlier this season. But, nothing the gap between winter and training camp, Saleh did leave the door open to change.

“Heâ€™s got an unbelievable arm talent. Thereâ€™s a reason why he was the number three pick in the draft. Heâ€™s fearless in the pocket, heâ€™s got a natural throwing motion, heâ€™s mobile, heâ€™s extremely intelligent, and heâ€™s tough as nails,” Saleh said in video provided by the Jets. “Weâ€™re just getting the (coaching) staff into the building, so thereâ€™s so many things that we have to do from an evaluation standpoint with regards to the entire roster, not just at quarterback. To give you that answer right now would not be fair.”

Also under contract for the Jets is fourth-round pick James Morgan, who did not dress in any games last season.

The former Super Bowl MVP did a respectable job in four starts in substitute duties, throwing for 848 yards and six touchdowns. His Total Quarterback Rating, calculated by ESPN, of 57.9 was his best since 2014.

While Flacco could be brought back as a veteran mentor and backup to Darnold or the new, younger franchise man, the former Super Bowl MVP hinted that he believes he can still be a consistent NFL starter.

â€œI obviously still believe that Iâ€™m a starting quarterback,” Flacco said in May, per Andy Vazquez. “You never know what three years down the line is going to look like, so I still have that confidence and I still have the want, the want to to do that. But at this moment, thatâ€™s not my role.”

It’s very possible, depending on how the free agency market shakes out. Falling out of the top spot of the draft no longer seems like a tragedy it was made out to be after the College Football Playoff, particularly during its Sugar Bowl leg. Ohio State thrower Justin Fields outplayed presumed top choice Trevor Lawrence en route to a 49-28 victory, leaving the first choosers in Jacksonville a big decision to make while the Jets can swoop in and take who’s left. Of course, if the Jets land one of the names below, drafting a quarterback would be null and void.

If the Jets do decide to stick with Darnold, it’s possible they could use one of their day two picks (owning an extra through the Jamal Adams trade with Seattle) on a quarterback to raise the heat on the incumbent. Options in a relatively deep class could include Kyle Trask and Mac Jones.

Not even the chase for the Super Bowl could derail the hype around Watson and his potential next destination. Things hit a green fever pitch over the weekend when Watson reportedly declared that New York would be his ideal destination. Saleh celebrant Richard Sherman has done nothing to dispel the rumors, joining Cris Collinsworth’s podcast to encourage Watson to get to the metropolitan area. It speaks volumes that Watson, who has also reportedly expressed interest in working with Saleh, would be willing to come to a team that is potentially rebuilding.

Over the weekend, ESPN Adam Schefter reported that Stafford and the Lions appear headed toward a divorce. The Jets, again, have the cap space to work with a big contract like Stafford’s, but, like Watson, it wouldn’t be fair to subject him to the franchise the way it is now…there is no Calvin Johnson on this team, at least at the moment. But since the Jets have the assets to work with, it would almost be foolish to not consider the possibility.

Would the Jets be better off with a placeholder quarterback of sorts as they seek to regain their NFL footing? There are few better options than Brissett if they opted to go that route. Brissett faces a bit of a crossroads in his career, in that he could fight to regain the starting position with the Colts now that Phillip Rivers has retired, or seek a new opportunity elsewhere. He did a solid job stepping for Andrew Luck upon the latter’s sudden retirement and later developed a slight niche for coming in on short-yardage or deep-ball situations.

It seems safe to assume that the Jets’ quarterback situation will be different going into the 2021 campaign, whether it’s at the top or in terms of understudies. If prior regime changes across the NFL are any indicator, it seems that the Jets will indeed move on from Darnold, with the only question being whether it comes through the draft or free agency.

Opting to find a new franchise man through the draft might be a conservative but far more affordable option. Adding a name like Deshaun Watson to New York sounds like a lot of fun and the Jets have plenty of assets through draft picks and cap space to negotiate with. But the fact of the matter is that the Jets have many, many holes to fill beyond the quarterback spot…which, in the eyes of some, may not need to be filled in the first place. If there’s little left to spend to fill the other holes, then a player like Watson or Matthew Stafford would be no better off than when they started.

To spend a majority of the offseason budget on a single big-ticket item wouldn’t be smart. There’s time, however, to make the situation more attractive to an incoming rookie quarterback by parceling those assets through building blocking help and more weaponry.