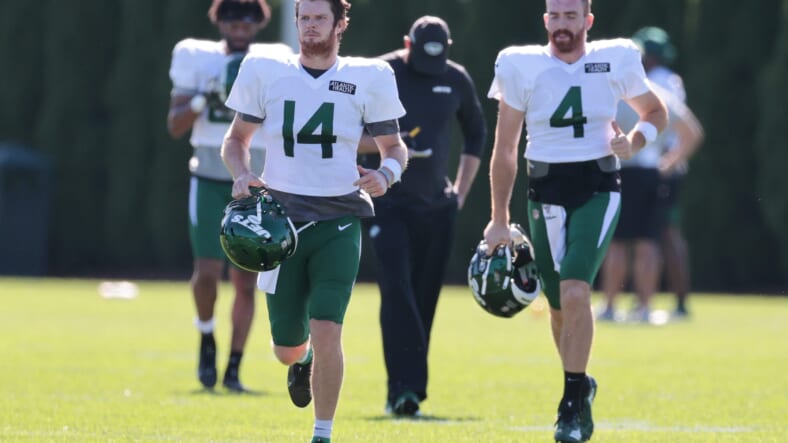 As the season looms, I decided to take a deep dive into each New York Jets position group within the organization and grade each group. The quarterback position, aside from Sam Darnold, has lacked depth in recent years. That was ever apparent last season with the poor play of quarterbacks in Darnoldâ€™s absence. This offseason, the Jets looked to address that problem with the additions of Joe Flacco and James Morgan.

Sam Darnold enters year 3 with incredibly high expectations. Darnold has his work cut out for him. The Jets receiver room is incredibly thin and lacks a true number one receiver. The running back room and tight end rooms are more than formidable. The offensive line is presumably improved, but ultimately the team has no sure things for him. Coming off a solid finish to a year hindered by mono, Darnold has reportedly shown growth in the offseason as both a leader and an athlete. Now, itâ€™s time to put it to the test in Orchard Park in 2 or so weeks. For now, though, his factor into the grade is based on both the potential, end of season, and early career woes.

Once Joe is healthy, the job is his. Flacco wasnâ€™t brought in to sit behind two young third-string caliber QBs and a rookie. He was brought in because a former Super Bowl champion who can mentor Sam and also step in if need be. Flacco provides stability at the backup position that the Jets didnâ€™t have last season with Trevor Siemian. Still, how stable is Flacco truly? Last season he was less than impressive in Denver. Then he got hurt. Coming back from injury and exiting his prime doesnâ€™t give me much excitement for Flacco, still, his veteran experience earns him decent points for me when grading the group.

Surprise! White has caught the eye of many in camp. Iâ€™ve been thoroughly impressed with what Iâ€™ve seen in terms of footage. White is only 25, but after being released from the Cowboys, heâ€™s been a practice squad fixture. Now, White came into the season more in shape than ever and throwing a great ball. Heâ€™s never stepped on an NFL field, but he got an opportunity to go against the starting defense and impressed in a scrimmage. White might not know the offense as well as Fales, but if he can even remotely perform on the field, heâ€™s the best option at backup for now until Flacco is healthy. White is unproven, but Iâ€™ve been impressed, so heâ€™ll do okay for me in terms of grading.

Neither guy has been very bad or outstanding in camp. The decision on who gets the third spot likely comes down to investment, thus, Morgan will stay on the roster. White, Fales, and Morgan is all about preference. I talked about Whiteâ€™s good ball. Fales knows the system like the back of his hand. Morgan has all the size and leadership to be an excellent backup. I like Morgan a lot and hope he gets a shot to be the main back up soon. I wouldnâ€™t doubt that Fales will be gone after camp, but once again, itâ€™s all about what Gase thinks fits best. For that reason, Iâ€™m grading this purely on potential as a backup for each individual.

I think Sam Darnold is a B-B+ QB, but he canâ€™t carry the uncertainty of the rest of the room on his back. With Flacco injured and the unproven nature of Fales, White and Morgan, there is no sure thing to backup Sam. As last season proved, the backup is key, and without a sure thing, I donâ€™t feel comfortable giving this group a great grade. Still, if Flacco is healthy and one of the other three can step up, this room isnâ€™t awful, so a C+ feels right.