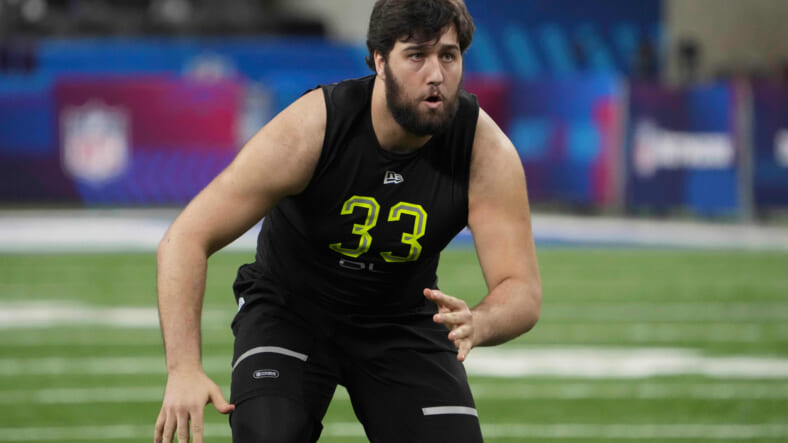 It was just announced by the New York Jets that they agreed to terms on a contract with fourth-round offensive tackle Max Mitchell. According to Rich Cimini of ESPN, the deal is worth $4.5 million with a signing bonus of $796K. The rookie deal puts Mitchell under contract with the Jets for the next four years, through the 2025 season.

Knowing the Jets had to add offensive tackle depth, the selection of Mitchell with the 111th pick was not a surprise. His projected value in the draft was roughly late in third round to the middle of the fourth round.

Mitchell brings a good enough frame for an offensive tackle. Mitchell is tall at 6-foot-6, weighs 307 pounds, and has 33 1/2″ arm length. Athletically, he did not test too great but still moves with fluidity on the football field. His Relative Athletic Score (RAS) was a 5.55. The best scores Mitchell recorded were his 10-yard split of 1.78, 4.65 20-yard shuttle, and 106″ broad jump. He showed a little bit of everything in terms of initial speed, explosion, and agility.

Mitchell had a great 2021 season at Louisiana. He played over 850 snaps at right tackle and earned a fantastic PFF grade of 94.8. As a pass blocker, he only allowed one quarterback hit, nine hurries, and three sacks. Mitchell proved some encouraging things as a run blocker throughout his college career as well. It is worth noting he was solid the prior two years before his breakout 2021 season.

As noted, Mitchell is a gifted pass blocker which gives him upside to grow with the Jets. He plays with adequate quickness and can fit in the Jets’ zone running scheme. His hand technique is a quality component of his game. The main area for growth with Mitchell is blocking against power. Once he gets his play strength where it needs to be, the potential for Mitchell to help the Jets is there. He also has what it takes to play at either left or right tackle.

The Jets have looked for high-character individuals under Joe Douglas and Robert Saleh. Mitchell provides just that. He was only a two-star recruit who is known for his leadership and toughness. Mitchell played at least 10 games over the last three years and recorded at least 600 snaps a season.

Mitchell is a young prospect at 22 years old and will turn 23 in October. Now, with Mitchell signed, the Jets have six of their seven 2022 draft picks under contract. With less than two weeks until the rookies report for training camp, the last draft pick the Jets now need to sign is running back Breece Hall.