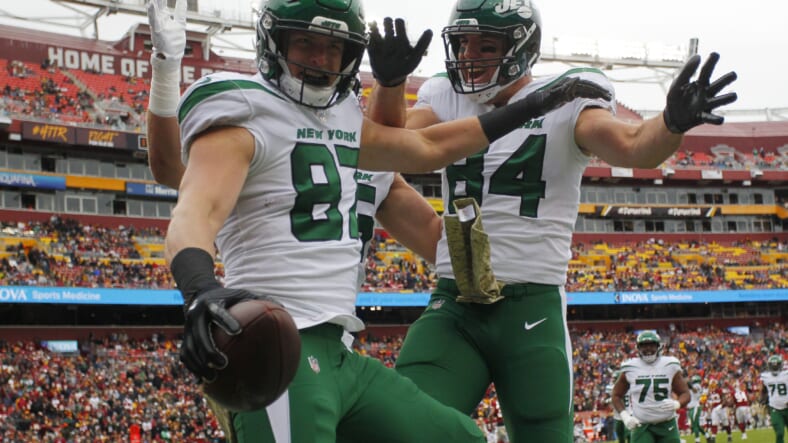 The Jets officially locked down their position for the 2020 draft. They could have a compensatory pick added if the Giants bring back Leonard Williams but for the time being, this is where theyâ€™ll pick. Using The Draft Network Mock Draft Simulator and taking the best players at each position based on needs, potential, and more here is an early projection of what the Jets draft could look like.

Robby Anderson seems inclined to look for the best possible destination to play both competitive football and get paid around $10 million a year. It remains to be seen whether or not the Jets will bring him back next year. With or without him on the roster, CeeDee Lamb would be an excellent addition. In this scenario, all three premier offensive line prospects were off the board. Lamb was the most talented player available and he projects to be a Deandre Hopkins Esque wideout at the next level. His route running could be improved but heâ€™s a dynamic number one receiver type who can stretch the field and provide significant YAC potential with every catch. Adding Lamb would be an excellent weapon in Darnoldâ€™s arsenal for the future.

Adding Becton, especially in the second round would be a STEAL. Becton is a 6â€™7 369-pound beast who could immediately provide an upgrade at left tackle. Becton has the potential to be a Star left tackle who can produce in a big way at the next level. His size makes him an excellent pass protector and his mauling style of blocking makes him a beast in the run game. Adding Becton would be the type of move that would immediately gain Joe Douglas a lot of fans.

Zack Baun can be the type of piece that Gregg Williams would have a lot of fun with. He plays with a lot of heart and has a very high football IQ. Heâ€™s a smart pass rusher and a damn good one. He had 12.5 sacks last year for Wisconsin and deserves significant Draft attention. Baun is not a perfect player but heâ€™s the kind of player with the potential to be a captain of the defense in the future and play a TJ Watt style role in the defense. Baun would be a great pick for the Jets at 68 and would immediately slot in as a rotational pass rusher.

If Lev Bell is still in the picture come April the Jets may be reluctant to take a half back. However, I donâ€™t foresee Bell being a Jet come April. Najee Harris is the next good running back churned out of a school thatâ€™s produced so many talented backs over the past few years. Heâ€™s never been a lead back and if Bell is still around he would be a good complementary back. If he is the lead back then he will need to grow into the role over time and develop as a pass-catcher. Overall though heâ€™s a talented running back with good size. He reminds me of Matt Forte and if he can be any bit as good as him then the Jets will have found themselves a nice weapon for Sam Darnold.

The key point of the first three rounds was getting protection and weaponry for Darnold that will grow with him as well as adding an edge rusher with a lot of potential at the next level.