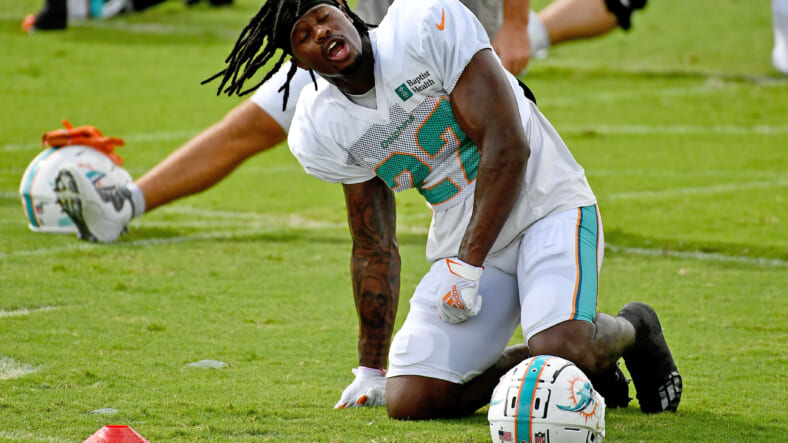 The New York Jets placed three on short-term injured reserve and added another rusher as they prepare for a visit from the 49ers.

The New York Jets announced the addition of running back Kalen Ballage on Tuesday afternoon. His arrival corresponds with the Jets placing three players on injured reserve, headlined by fellow rusher Le’Veon Bell.

Bell’s second season in New York got off to a tough start, as he ran for 14 yards on six carries in the Jets’ 27-17 loss to the Buffalo Bills in Orchard Park. He was removed from the game in the second half with a hamstring injury sustained in the first. Head coach Adam Gase expressed his regret over keeping Bell in the game during his postgame statements.

“I’m mad at myself that I let him back in there in the second half,” Gase said in video provided by the Jets. “I was watching him, and I thought it was going to be a touchdown. He got grabbed and the way he planted and torqued, it looked really bad. I saw him grab his hamstring and he wouldnâ€™t come out. When we came in at halftime, I let him go back in there. I was worried about it. Eventually, I was like, â€˜I canâ€™t put you in there. We canâ€™t take a chance of getting more hurt than you already are.â€™”

Joining Bell on injured reserve will be receiver Denzel Mims and linebacker Blake Cashman. The rookie Mims, the Jets’ second-round pick in April’s draft, dealt with hamstring issues throughout training camp and did not play in Sunday’s opener. Cashman, a second-year defender, had one tackle before sustaining a groin injury. As a rookie last season, he earned praise for filling in for injured starter C.J. Mosley before he himself was lost for the season in November with a torn labrum and fractured shoulder.

Joining the team in place of Bell is Ballage, a former Miami Dolphin who was previously dealt to the Jets in a training camp trade that was later voided when he failed a physical. Ballage was released by the Dolphins shortly after the voided transaction. The rusher now reunites with former coach Gase, who oversaw Ballage’s drafting in the fourth-round (131st overall) of the 2018 draft. Ballage, best known for scoring a Football Bowl Subdivision record eight touchdowns in a single game at Arizona State, tallied 545 total yards of offense over two seasons with the Dolphins.

The Jets return to action on Sunday afternoon against the San Francisco 49ers (1 p.m. ET, Fox).