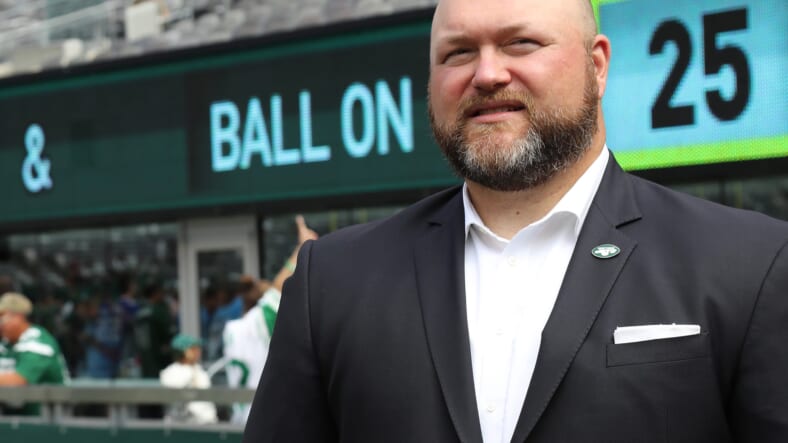 The New York Jets proved to be good luck charms for fellow metropolitan professionals competing in the weekend’s postseason fare.

THE SQUAD IS BACK AT THE COLI

The New York Jets need some help in toppling a New England-based opponent, having dropped ten consecutive contests against the Patriots. Fortunately, the team was able to do conduct some offseason research over the weekend.

The respective championship quests of both the Brooklyn Nets and New York Islanders enjoyed a bit of a boost with Jets players in attendance on Saturday night. Each team is in the second round of their league’s postseason proceedings and both of them have had to deal with opponents of Massachusetts origins.

Offensive representatives once again descended upon Nassau Coliseum to watch the Islanders’ 4-1 triumph over the Boston Bruins in Game 4 of the NHL’s East Division title series, knotting the best-of-seven series at two games apiece. Much like their prior visit to Uniondale, offensive lineman Dan Feeney stole the show by celebrating Islander goals by raucously finishing off his beer.

Feeney was joined by several of his new offensive teammates, including fellow metropolitan newcomers Zach Wilson and Michael Carter. The scorers were once again clad in customized Islander jerseys bearing the names and numerals they’ll wear on the gridiron.

The players appear to be far more effective talismans for an Islanders team seeking its first Stanley Cup hoist since 1983; head coach Robert Saleh took in Game 3 of the series on Thursday night, but Boston prevailed in a 2-1 overtime decision.

An hour away in Brooklyn, Joe Douglas was on the scene for the Nets’ second-round opener against the Milwaukee Bucks. The showdown against Giannis Antetokounmpo and Co. was set up through a 4-1 series victory over the Boston Celtics in the Eastern Conference’s quarterfinal round.

Atrending a Brooklyn Nets game wearing a Bret Hart shirt……Joe Douglas is officially one of us now @EvanRobertsWFAN lol. https://t.co/D6SFOCJEo9

Brooklyn dealt an appropriate blow to the Bucks in the first game of the series, as they overcame the medically-induced absence of James Harden to earn a 115-107 victory.

The Jets’ new friends both return to postseason action on Monday night. The Islanders ship back to Boston for a pivotal fifth game in the quarterfinal round (6:30 p.m. ET, NBCSN) while the Nets look to take a two-game lead in the Borough of Churches (7:30 p.m. ET, TNT).