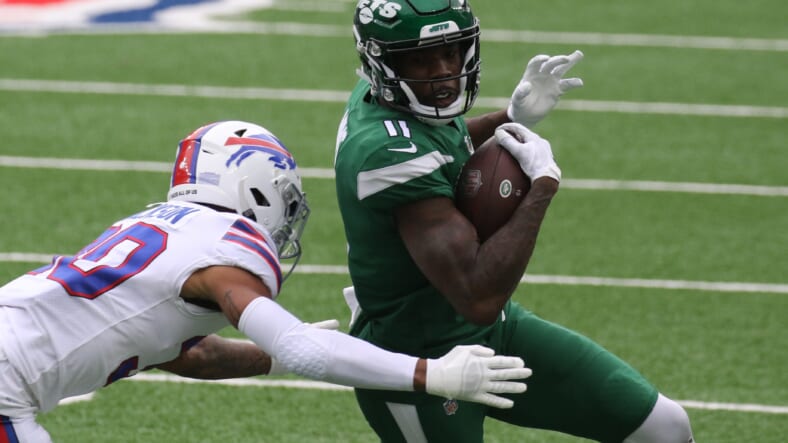 The ache of yet another New York Jets loss was somewhat soothed by the emergence of Denzel Mims, who made his NFL debut on Sunday.

It’s bad enough that the New York Jets have subjected their fans to such a brutal season in the midst of uncertain times. But for the first six games of this cursed trek to provide little in terms of hope for the future, it was downright cruel to a supporter base that has dealt with countless examples of football malarkey over the last five decades.

Entering Sunday’s MetLife Stadium tilt against the Buffalo Bills, the Jets had lost their first six games by an average margin of just over 18 points. Even the promise of showcasing young talent fell by the wayside in these early games. Punter Braden Mann has certainly been busy (leading the NFL with 39 kick-aways), but injuries (Mekhi Becton, Cameron Clark on the line) and mismanagement (La’Mical Perine still struggling to earn more carries that Frank Gore) have prevented other members of the Jets’ 2020 draft class from getting opportunities in relatively consequence-free situations.

Up until the buildup to Buffalo’s visit, Mims was stuck in the former category, sidelined by a hamstring issue that cost him the majority of his debut NFL training camp. The second-round pick out of Baylor was activated on Saturday and granted his first NFL action a day later in East Rutherford.Â While a victory was once again too much to ask for, Mims made the most of his new opportunity.

The Jets fell by an 18-10 final to their divisional rival, but Mims led the team with 42 yards on a quartet of receptions, his longest being a 16-yard gain up the middle in the second quarter. Mims was shut out, along with the rest of the Jets’ offense, as the unit gained only four years in the second half while they watched a 10-0 lead evaporate. But the rookie nonetheless earned positive reviews after his first four quarters of NFL action.

â€œDenzel did some really good things out there for us,â€™â€™ quarterback Sam Darnold said, per Mark Cannizaro of the New York Post. â€œHeâ€™s a big body, a fast dude who can go up and make plays, make contested catches. Weâ€™re going to continue to use him in ways that provide us opportunities for that.â€™â€™

â€œEarly it looked like there was some good stuff there. He showed up, he made some plays, made some catches,â€ head coach Adam Gase added in a report from Christine Watkins of Sports Grind Entertainment. â€œYou could tell his length is real, he uses his body to his advantage.â€

Mims was sure to soak up all the intensity an NFL setting had to offer, but even he took a moment to be starstruck upon earning his catch as a professional.

“I had a big grin on my face,” Mims said, according to Andy Vazquez of NorthJersey.com. “I knew that I was getting the ball that play and when I made the catch, I was very excited. … I knew that all I had to do was look the ball in and make the first catch.”

Mims did a solid job getting open throughout the afternoon. He made two big grabs on the Jets’ lone touchdown drive of the day and later provided a crucial block on Bills cornerback Tre’Davious White on the score, punched in by Perine.

How about the block by Denzel Mims pic.twitter.com/mMCIsJs3eH

“It was a little faster than what I’m used to in college,” Mims said of the game’s tempo, per Vazquez. “But I adjusted quick. I knew that I had to play at that speed, or faster to make something happen on offense.”