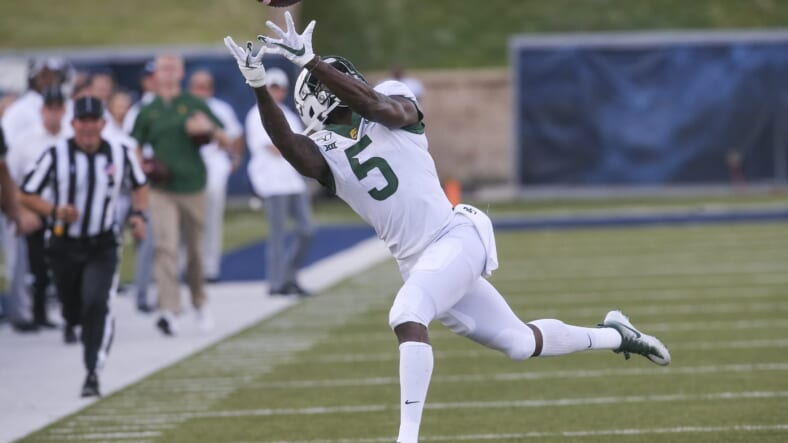 The New York Jets have had a very thin receiving group for most of the season thus far. Part of that has to do with their rookie second-round pick, Denzel Mims, having yet to play in a game. However, signs are pointing to him potentially making his Jets debut tomorrow against the Buffalo Bills.

The drafting of Mims had many fans excited to see what he can bring to the offense and how he could help Sam Darnold’s progression. The Baylor product amassed 66 receptions for 1,020 yards and 12 touchdowns as a senior last year. His ability to track the ball in the air downfield, along with his athleticism, are additions Darnold and the offense desperately need.

Mims missed nearly all of training camp with a hamstring injury. He then suffered another hamstring injury a few days before the Jets’ season opener, which has kept him sidelined since. This week, however, he was able to practice for the first time since the injury. The rookie wideout feels as though his connection with Sam Darnold hasn’t suffered at all due to the missed time.

“We both came back around the same time this time, I feel like we just picked up where we left off,” Mims said after practice Friday. “We continue to try and get better.”

After being drafted in the second round, Mims was expected to be an immediate contributor to the offense and even push for that number-one spot. There’s no question that he would exclusively benefit this offense and head coach Adam Gase has nothing but praise for the rookie.

“He has all those traits that you’re looking for in a guy that can be a really good receiver,” Gase said.

With the team’s best receiver, Jamison Crowder, missing practice and currently being listed as questionable, Mims’ presence could potentially be vital for any chance of a “competitive” game.

The Jets have just 1,660 total offensive yards through six weeks, 1,028 of which are passing yards. The average yards-per-pass through six weeks is just a mere 5.5 yards. Also, the offense has scored just seven touchdowns. Yes, that’s right. Seven.

Denzel Mims could drastically help by supplying another deep threat, solid route runner and a 50/50 ball-winner all in one.

He finished his collegiate career ranked sixth all-time in receiving yards and fifth in receptions at Baylor. Now, he looks to show what he’s capable of at the highest level. He missed his expected debut Week 1 against the Bills and now he has a chance to make his debut during Week 7 against the same team.