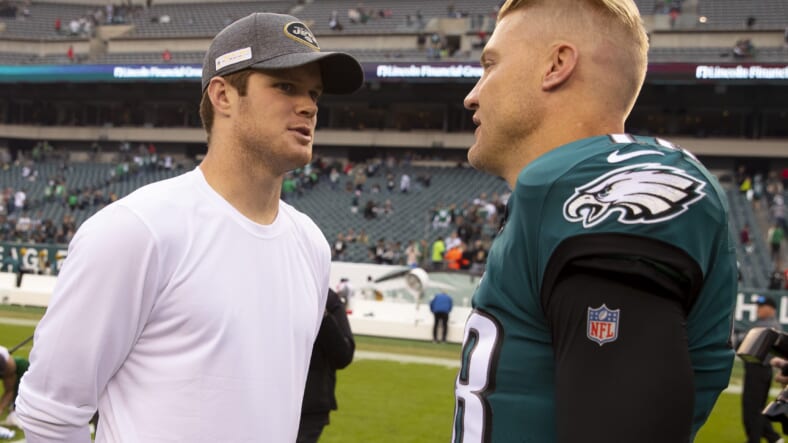 PHILADELPHIA, PA - OCTOBER 06: Sam Darnold #14 of the New York Jets talks to Josh McCown #18 of the Philadelphia Eagles after the game at Lincoln Financial Field on October 6, 2019 in Philadelphia, Pennsylvania. (Photo by Mitchell Leff/Getty Images)

The first-ever 17-game regular season will feature a matchup between the New York Jets and their cross-conference green rivals.

See you this fall, @Eagles.

The NFL confirmed plans to move forward with its first-ever 17-game regular season on Tuesday afternoon. League owners voted in the new change, which also trims the preseason slate from four games to three.

Under this new format, which will take effect immediately, the Jets will host a ninth home game, this debut edition coming against the Philadelphia Eagles.

A 16-game schedule had been an NFL staple since 1978, with exceptions in the strike-shortened 1982 and 1987 seasons. These newly minted extra games will apparently be interconference matchups, corresponding to the matching divisional finish with another quartet. For example, under the first year, the squads of the AFC East will battle those in their NFC equivalent.

By virtue of their fourth-place finishes, the Jets (2-14) will battle the Eagles (4-11-1) at MetLife Stadium. Division champions Washington and Buffalo will square off in Orchard Park while the Miami Dolphins will make a second visit to East Rutherford to battle their fellow runner-ups, the New York Giants. The matchups are rounded out by a battle between the Dallas Cowboys and the New England Patriots in Arlington.

The Jets and Eagles have met quadrennially since the league switched to the current eight divisions in 2002. Alas for the Jets, the matchup has proven torturous as they have lost all 11 regular season meetings, the last being a 31-6 shellacking at Lincoln Financial Field in 2019. The teams have met annually in the preseason since 2001, a get-together that has proven far more lucrative for New York, who owns a 13-6 advantage.

In further NFL news, the 2021-22 season will open on Thursday, September 9 in a game that will likely involve the defending Super Bowl champion Tampa Bay Buccaneers. With the extra game on the schedule, the playoffs will begin on January 9 with Super Bowl LVI scheduled for February 13 at SoFi Stadium in Los Angeles. The Pro Bowl is set to return after being forced to virtual settings last season, with the 2022 edition set to be held at Allegiant Stadium in Las Vegas.