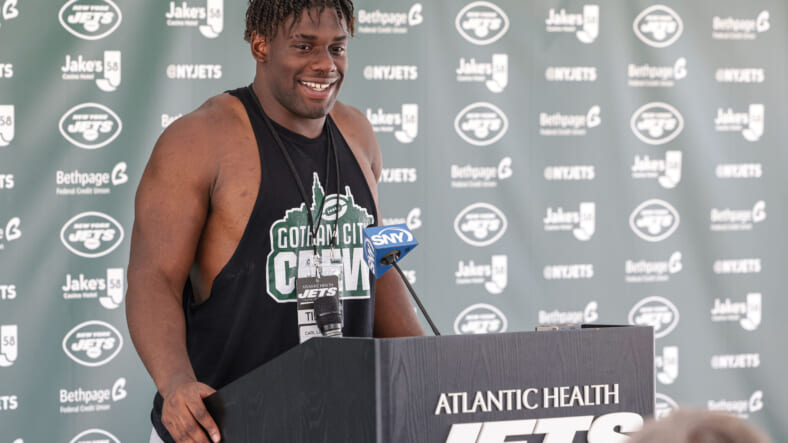 Carl Lawson was the New York Jets’ big free agent signing in the 2021 class. He signed with the team on a hefty three-year contract. Lawson seemed destined to break the trend the Jets were battling of missing on huge free agent investments before sustaining a gruesome injury. Lawson recently turned 27 years old and is going into year six of his NFL career. Hopefully, Lawson provides the Jets with substantial production in his second year with the team.

Last season was difficult for Lawson. He was reportedly dominating every single day of training camp and the best player on the field for the Jets. For so long, the Jets have lacked a dominant edge pass rusher with game-breaking speed, and Lawson looked to be bringing that to an end last summer. In practices with the Green Bay Packers, Lawson suffered a devastating Achilles injury. It took a lot out of the Jets team and fan base. Lawson seemed primed to provide great excitement. His impact was sorely missed as the Jets did not have a speed rusher on the outside most of the year. Vinny Curry ended up not playing a game last year. Bryce Huff also got injured in the middle of the season.

Lawson is not the tallest at 6-foot-2 or the longest with 31 1/2″ arms. He does, however have good size at 265 pounds and big 10 3/8″ hands. Lawson has both good speed and power as a pass rusher. He is a very good athlete who has play strength as well. Lawson is an advanced rusher with his consistent plan and variety of moves. He also has savvy hand technique, which enables him to win.

Lawson will be counted on as the Jets’ top pass rusher on the edge. On third downs in particular, as well as in two-minute situations and late in games, he will need to make his impact felt. Lawson should routinely generate splash plays for the defense with his ability to get after the quarterback. On early downs and run-specific situations, it will be interesting to see what Lawson’s usage is. The Jets will rotate the defensive line a ton, but Lawson should still get a significant amount of playing time on first and second down. Playing roughly 60% of the defense’s snaps is a reasonable expectation for Lawson this year.

Over the three seasons, Lawson has played 12 or more games, he has recorded five, 5.5, and 8.5 sacks. Should he play in all 17 games or close to it, anticipate a similar type of sack production. Getting seven sacks this year would be good for Lawson. Another key point with Lawson will be generating pressure. In 2020, he posted a remarkable amount of 64 total pressures (four per game). Coming off an injury, if Lawson could generate roughly 50 pressures (three per game), it would go a long way for the Jets’ defense.

Lawson could make a substantial difference for the 2022 Jets. He is a naturally gifted pass rusher with his speed, power, moves, and technique. Hopefully, he is healthy. If so, he has the talent to drastically improve this defense that struggled tremendously a year ago. Creating consistent pressure in crucial situations will be the main point of emphasis. Expect a very good comeback year from Lawson in his second year with the Jets.