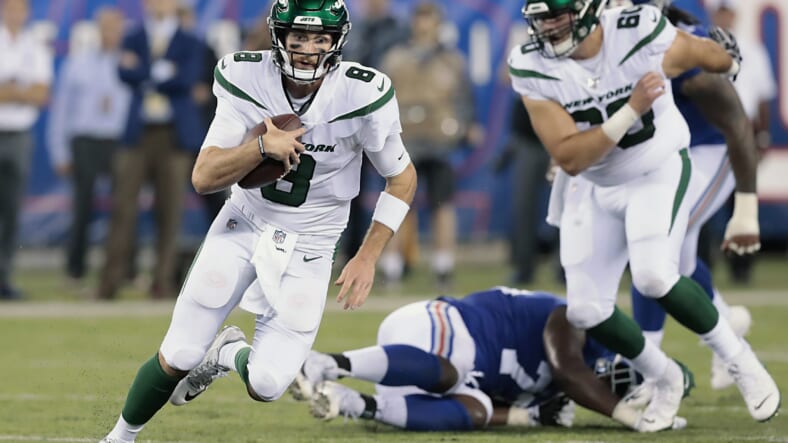 With two weeks until the preseason comes to a close for the New York Jets, cut day is looming. With crucial multiple position battles beginning to get intense, itâ€™s time to check in on who will be on the 53 man roster.Â

The battle is between Luke Falk and Davis Webb. Davis Webb was supposed to be the guy who ultimately took over for Eli Manning in some people’s eyes. He works hard and prepares to be the starter even with Trevor Siemian in front of him. He has dedication, but I hate to say it, Luke Falk beats him in the talent department. I was a big fan of Luke Falk coming out of college.

He was one of my under the radar guys who could end up as a suitable backup or average starter. He faced a lot of hardship at Washington State seeing the death of one of his best friends and his backup QB. Now he finally gets rewarded for his talent and is primed to be the third-string QB for the New York Jets.

Bilal Powell was a veteran of this squad for a few years. Heâ€™s a leader and a good role model for guys like Leâ€™Veon Bell and Ty Montgomery. Talent-wise he might not have it all like he used to, but he might still be a productive piece to have around especially for his off the field contributions. Elijah McGuire has had his shots to run away with the lead back job even last season. He never did anything to ‘wow’ anyone and has had a lackluster training camp.

Trenton Cannon will likely get kept as a specialist so McGuire could be on his way out and Bilal Powell looks like the guy who will be holding down the fort at RB 3.

Can Anyone Kick A Football for the New York Jets?

The battle is genuinely Taylor Bertolet vs. himself. The young kicker played pretty poor against Atlanta and further reiterated the sentiment that the Jets need a new kicker after the old regime let their pro-bowler walk out the door. The Jets week one kicker needs to join the team soon, or Taylor Bertolet could still be the guy costing the Jets valuable points.

Punter seemed to be a spot that didnâ€™t need to raise any eyebrows. Lachlan Edwards is a phenomenal punter and in my opinion, one of the best holders in the game. Lachlan makes kickers better and is an excellent punter. Heâ€™s a safe option and would be my option. He has Brant Boyer (Special Teams Coordinator) in his corner. However, Matt Darr received the bulk of the punts vs. the Falcons and has the head coach in his corner. He had a rocky few years in Miami, and he saw great success and utter failures. Now the Jets are at a crossroads with their punting situation. Right now Iâ€™d say itâ€™s anyoneâ€™s race, but Iâ€™d give Lachlan a slight edge.

The WR spots and more will be highlighted in part two.