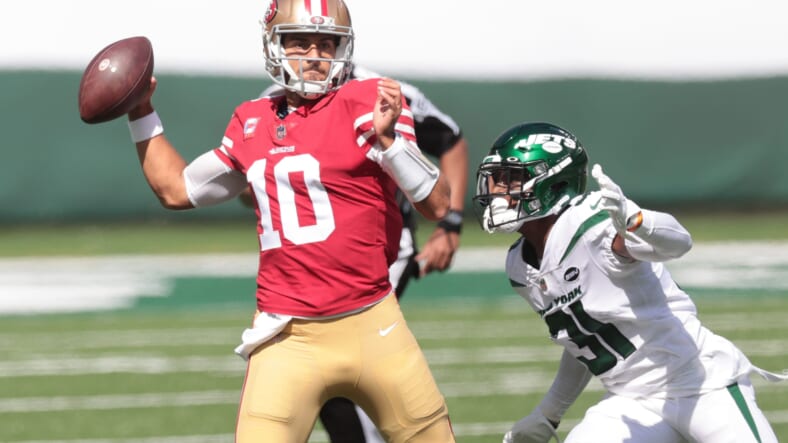 Granted one of the New York Jets’ primary cornerback roles, Austin promised to live up to the great expectations placed upon him.

If you tried to turn Bless Austin’s football career into a movie, a Hollywood studio would probably reject. Not only is Austin’s NFL journey in its infantile stages, but the screenplay could be criticized for being too on the nose.

Fortunately, Austin has been watching his fair share of film as is.

Speaking after the Jets’ training camp activities on Monday, Austin is penciled in as one of the Jets’ primary cornerbacks as their preseason opener looms this weekend. As Austin prepares for extended duties, he’s taken in head coach Robert Saleh’s San Francisco filmography, with 49ers cornerback Emmanuel Moseley serving as his muse. Austin also admitted to taking a look at Saleh’s former division rival Jalen Ramsey out in Los Angeles.

It’s part of a personal goal of Austin’s that is anything but modest: to become one of the NFL’s best defenders.

“I think I’m the real deal. (There’s) no secret in that,” Austin said in a report from Dennis Waszak Jr. of the Associated Press. “Of course, I make mistakes, but there’s also a lot of plays I’ve made on that field that other corners in this league aren’t making.”

Born in Queens and starring at Campus Magnet in Cambria Heights (formerly known as Andrew Jackson High School), Austin stayed in the tri-state area, moving on to Rutgers during some of their earliest days in the Big Ten. He immediately made an impact with 14 pass breakups in his sophomore season but injuries ate away at his latter two seasons.

The Jets chose Austin with their final pick of the 2019 draft (196th overall) after partaking in only five games in his last pair of collegiate campaigns. Entering his third professional season, Austin is now an elder statesman in Gang Green’s secondary: he’s the longest-tenured Jet in the team’s cornerback room and might be the most experienced at the position overall: special teams ace Justin Hardee is the only listed such defender who has been in the league longer.

Through his first two NFL season, Austin has developed a reputation as a physical defender, but his coverage needs work. A brutal coverage grade of 47.4, bestowed by Pro Football Focus, ranked 112th among 136 qualified cornerbacks. PFF has refused to let up, calling the Austin-headlined New York cornerback group one of the weakest units in the league back in April.

With the Jets woefully undermanned in terms of experience in the secondary, some have clamored for the Jets to search for veteran help from abroad. C.J. Henderson, a top ten a pick a year ago, could be up for grabs with the Jaguars reportedly ready to put him on the trading block.

The cornerback, however, won’t hear of it. He’s not only confident in his own abilities but he also spoke glowingly of his new co-worker in the secondary.

Austin is set to work next to Bryce Hall, another day three choice with something to prove. The Virginia alum was projected to be a first-round pick after his junior season but a devastating ankle injury relegated him to the fifth round of the 2020 draft, where the Jets scooped him up. Hall showed promise over eight NFL contests after the Jets’ in-season fire sale purged several veteran corners, even earning his first professional interception in the team’s first win of the season over the Rams.

Austin unveiled a dire warning to those disregarding he and Hall simply because of their star-crossed collegiate careers: do so at your own risk. That notice might extend to the Jets’ front office, which has rarely used the calendar as an excuse for inaction on the free agent front.

â€œThe front office and the coaching staff does a great job of communicating to us where their head is at,â€ Austin said, per Ryan Dunleavy of the New York Post. â€œA lot of people forget me and Bryce were highly rated dudes coming out of college. We just fell short to injury. Thereâ€™s a reason why they didnâ€™t bring a veteran cornerback in here. Not to knock any out there, but they see something in us.â€

The Jets’ revamped receivers, headlined by the arrivals of Corey Davis, Elijah Moore, and Keelan Cole, have given Austin a formidable challenge as he enters a year that could well determine the course of the rest of NFL career. It’s a challenge where he can’t “go through the motions and think Iâ€™m gonna have a successful day”, according to DJ Bien-Aime II of the New York Daily News.

But, true to the warning he bestowed to the Jets’ front office and the lingers free agent market, Austin is apparently impressing the right people as game day approaches.

“Heâ€™s got a dogâ€™s mentality, from a football sense,” Saleh himself said of Austin’s summer endeavors, per notes from the Jets. “He is absolutely fearless, heâ€™s very strong at the line of scrimmage, at least from the time Iâ€™ve gotten here, doesnâ€™t look like heâ€™s really bothered by the play before, he can move on. Itâ€™s just those attributes, the length, the strength, heâ€™s fast enough, itâ€™s just a matter of working the technique and understanding where you work in the defense. Heâ€™s shown everything that we want, itâ€™s just a matter of trying to get better and see what he looks like once we get with other opponents.”

“Bless (is) long, strong, aggressive, tough,” defensive coordinator Jeff Ulbrich added in those same quotes. “Heâ€™ll challenge you. He wants to play at the line of scrimmage, he wants to get his hands on you, he wants to disrupt. Heâ€™s a proven tackler, heâ€™s tough, heâ€™ll show up in the run game to support.”

The Jets open the preseason on Saturday night against the New York Giants in a battle for MetLife Stadium (7:30 p.m. ET, WNBC).