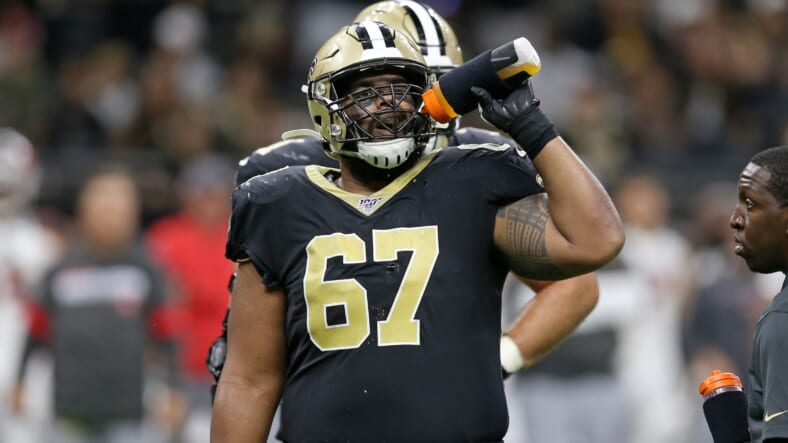 While the New York Jets spent valuable draft capital and plenty of money in free agency to solve the puzzle that is the offensive line, there could be moves left to be made to boost the unit further.

So far, the Jets have signed guard Greg Van Roten, center Conner McGovern, tackle George Fant and drafted with the 11th overall pick, Louisville tackle Mekhi Becton. This completely overhauled the unit, despite some of the players being fringe starters. Both Van Roten and Fant are average players at best, with McGovern and Becton being the two with the highest ceiling.

This could indicate that the Jets could still be in the market for a guard, which is where newly released player, Larry Warford, enters the picture. The former New Orleans Saint was cut for cap reasons, and according to NFL analyst Ian Rapoport, Warford is looking for about $7 million per season. The three-time Pro Bowl selection would be an excellent fit for the Jets, who could use Van Roten as depth given the injuries that have plagued the team in recent years.

From NFL Now: It's rare to see high-level free agents in May, but there are several this year — including G Larry Warford and DB Logan Ryan. pic.twitter.com/Jx8anic2Wo

Warford has been extremely healthy throughout his career, with both the Detroit Lions and Saints. The most games he has missed in any given season is three, and that was back in 2014 and 2015.

At 28 years old, Warford could fit the bill, but the Jets currently have Brian Winters at right guard, cementing the position. They could theoretically move Warford over to the left side, where Van Roten is expected to start.

This would inject a high-caliber guard into the position and further assist in Sam Darnold’s development. Ensuring that he is given the protection required to play at a high-level must be a priority, and it has been for general manager Joe Douglas.

Aside from Warford, the Jets are also close to signing cornerback Logan Ryan on a one-year deal, according to the New York Daily news.