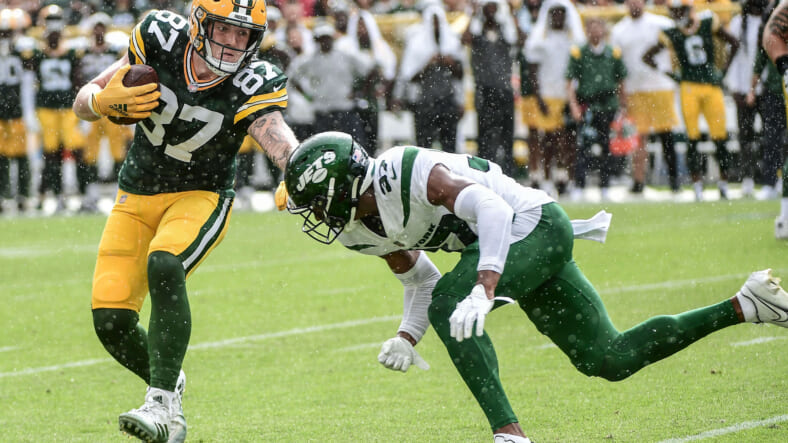 Bryce Hall is about to enter his second NFL season…which makes him a relic amongst New York Jets cornerbacks.

InÂ Star WarsÂ terminology, Bryce Hall is the NFL equivalent of a Padawan learner, an apprentice in layman’s (or people with a social life’s) terms: the fifth-round pick from Virginia has appeared in eight professional contests and is set to enter his second official season of service. The games on Hall’s infantile ledger were mostly irrelevant affairs in the grander sense of the NFL’s standings, though he made the most of the opportunity, recording 36 tackles and his first career interception.

By the New York Jets’ current cornerback standards, however, Hall is a seasoned Jedi Master.

Hall’s rapidly-gained seniority is part of the Jets’ efforts to eradicate almost every prescience of their garish two-win campaign from 2020. Of the 22 men listed in the Jets’ starting lineup from their most recent Week 1 contest (a 27-17 loss at the hands of the future AFC finalists in Buffalo that was nowhere near as close as the final scoreboard indicated), only eight are still with the team.

Cornerback Bless Austin was the latest casualty, as the Rutgers alum was surprisingly released in the aftermath of 2021’s first 53-man roster unveiling. Left behind is a hodgepodge of names who heard their names pressed into NFL service during the annual Saturday portions of the draft, be it through outright selection like Hall (158th overall) or post-Mr. Irrelevant free agency.

â€œI was surprised that they cut (Austin). He was working with the ones, so I didnâ€™t have any knowledge of what was going on,â€ Hall said of the surprising transaction, per Peter Botte of the New York Post. â€œBut thatâ€™s the nature of the business and you just have to keep going. You have to take it day by day and appreciate every opportunity that you get here. And the ball keeps rolling.â€

Both head coach Robert Saleh and general manager Joe Douglas have publicly stated that the release of Austin was made to afford more snaps to the Jets’ younger defenders in the secondary: the team drafted Michael Carter II, Jason Pinnock, and Brandin Echols and also kept undrafted rookie Isaiah Dunn. Another undrafted invitee, Javelin Guidry, returns for his second season in New York while his comrade Lamar Jackson lingers on the practice squad.

The release of Austin made Hall the most experienced NFL veteran in the Jets’ cornerback department. Justin Hardee is technically speaking the elder statesman…the 27-year-old is entering his fifth professional season…but he’s far more renowned for his special teams endeavors.

Thus, Hall is left to lead the Jets secondary into an uncertain future: everyone’s already aware of Marcus Maye’s franchise tag situation while Maye’s veteran partner at safety, Lamarcus Joyner, is likewise inked for only a single season in green. Guidry, he of 11 games in 2020, likewise has Hall slightly beat, though he’s expected to primarily handle the slot. Austin’s vacancy next to Hall has yet to be filled on the Jets’ unofficial depth chart.

Jets CB Bryce Hall getting after it at Thursday's practice: pic.twitter.com/mq30VyhJeb

Unexpectedly thrown into the New York spotlight, Hall isn’t looking for excuses for any shortcoming the Jets might face in what could be a trying yet optimistic 2021 season. The slate begins on Sunday afternoon as the Jets face the Carolina Panthers in Charlotte (1 p.m. ET, CBS). Carolina’s aerial attack is headlined by the former metropolitan connection of Sam Darnold and Robby Anderson and their receiving corps are further bolstered by DJ Moore and rookie Terrace Marshall Jr. Star running back Christian McCaffrey, who is set to make his return from an injury that erased most of his 2020 campaign, has proven to be an equally dangerous aerial threat.

“You grow up quick in this league,” Hall said in a report from Al Iannazzone of Newsday. “Thereâ€™s no excuse, no explanation, you just got to come in here and work. I think itâ€™s good because itâ€™s challenging me to step up into a leadership role to grow faster. Thatâ€™s what I need and thatâ€™s what I want.”

If anything, Hall’s ascension up the Jets’ tenure ledgers is a prime opportunity for him to prove that some early hype was well-earned. Entering the 2019 draft, Hall was seen by some as a first-round talent as his junior season ended in Charlottesville. He led the nation in pass breakups en route to All-American honors.

Hall’s decision to return to Virginia was brought upon by a situation remarkably similar to the quagmire the Jets find themselves in: the history of Cavalier football has often been defined by a one step forward, two steps back struggle in which they’re forced to deal with a more renowned in-state rival (Virginia Tech). Hall’s junior year antics helped UVA earn its first postseason win in 13 seasons, as the Cavaliers earned a 28-point shutout over South Carolina in the 2018 Belk Bowl. He didn’t wait long to disrupt the 2019 mock drafts, announcing his decision to return hours after the Cavs demolished the Gamecocks.

“I feel like I want to finish what I started here,” Hall said of his decision to return, per David Teel of Daily Press. “This program gave me so much, and before I leave I want to give everything I have to them. I want to develop also as a leader, and when that next phase of life comes, I want to be prepared.â€

Virginia indeed took things to the next level upon Hall’s return: they won the ACC’s Coastal Division (their first such title since 1995) and topped the hated Hokies (for the first time since 2003) en route to the conference title game and an appearance in the lauded Orange Bowl.

Alas, Hall was unable to reap the spoiled of his return. As the Cavs, ranked 20th in the Associated Press poll, battled Miami in Coral Gables, Hall endured devastating injuries to both his left leg and ankle. He missed the final eight games of the season and saw his draft stock plummet. Lingering effects from the injury cost him his first professional training camp, as well as the first half of his debut campaign in green.

But the experience allowed Hall to develop skills that will help define the rest of his football career. Though Hall’s name was missing from UVA’s lineups, he remained a reliable gameday prescience. He was granted a headset for the Cavs’ home games and commandeered positional meetings as the postseason dream became more realistic.

The process also allowed Hall to find clarity in his personal life: he realized that he would marry UVA field hockey player Anzel Viljoen, who remained by his side after his devastating ailment. He successfully proposed to Viljoen shortly after the Jets called his name at the draft and the couple welcomed its first child this offseason.

“(The injury) was huge. I felt like, usually, I am a guy who leads by example, but when I got hurt all I had was my voice and all I had was the experience that I had,â€ Hall said, per Joey Chandler of NJ Advanced Media. â€œI tried my best to help out the new guys, so I definitely feel like that has helped me as a leader to relate to the guys. Especially guys who are hungry and want to receive the knowledge that I have. I think that has trickled down into this system and this opportunity.â€

Thus far, a roller-coaster career has culminated in Hall leading the Jets into a season that’s expected to be defined by development. Two of his most important football seasons have been gnawed at by circumstances beyond his control. But in a tumultuous time for unproven leftovers on the New York Jets timeline, Hall has made himself essential and figures to be one of the pillars supporting the team’s quest to make it back to the NFL’s playoff conversation.

Simply put…The Force is strong with this one.