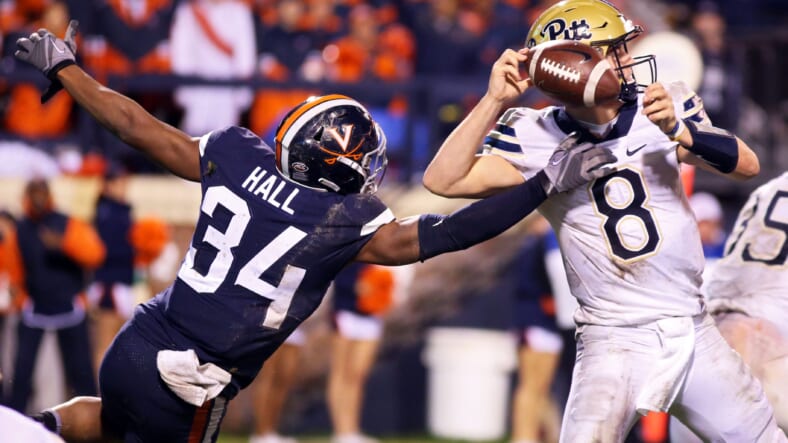 CHARLOTTESVILLE, VA - NOVEMBER 02: Bryce Hall #34 of the Virginia Cavaliers disrupts a pass by Kenny Pickett #8 of the Pittsburgh Panthers in the second half during a game at Scott Stadium on November 2, 2018 in Charlottesville, Virginia. (Photo by Ryan M. Kelly/Getty Images)

After he was chosen by the New York Jets, Bryce Hall’s week got even better, as he shared a video of a successful proposal to his girlfriend.

No matter how your week is going, it’s going to very hard to stop how the past few days have gone for Bryce Hall.

The former Virginia cornerback was first chosen by the New York Jets last Saturday afternoon in the fifth round of the 2020 NFL Draft. Hall has now donned a ring before playing his first professional down.

On Instagram, Hall revealed that he proposed to his girlfriend, fellow Virginia Cavalier Anzel Viljoen. Like Hall, Viljoen partook in Virginia athletics, representing the school’s field hockey team as a back. She led the team with 26 points (7 goals, 12 assists) and helped them reach the semifinals of the 2019 NCAA Division I Field Hockey Championship in November. The New Zealand native also earned second-team All-ACC honors.

Hall shared his surprise proposal, which Viljoen accepted, on Instagram.

“Sheâ€™s in it for the long Hall,” Hall declares in his caption “excited [sic] and ready to start this next phase of life with my best friend, lover, ride or die and answer to all of my prayers!!”

In the video, Hall is asked by an unseen party what convinced him that Viljoen was “the one”. He happily recalled Viljoen visiting him in the hospital after a broken ankle suffered in an October tilt against Miami ended his season.

“When she came to my hospital after I had broken my ankle, that’s when I was like, yeah this is the one, “It was 11:00 at night, everybody else went home and it was just me and her chatting it up. So I knew she was one to keep then.”

Hall’s engagement comes five days after he was the penultimate pick (158th overall) of the Jets’ 2020 draft proceedings. He put up 154 tackles and five interceptions during his four-year tenure in Charlottesville to go with 38 pass breakups. Of that latter tally, 21 came in 2018, which led the nation.