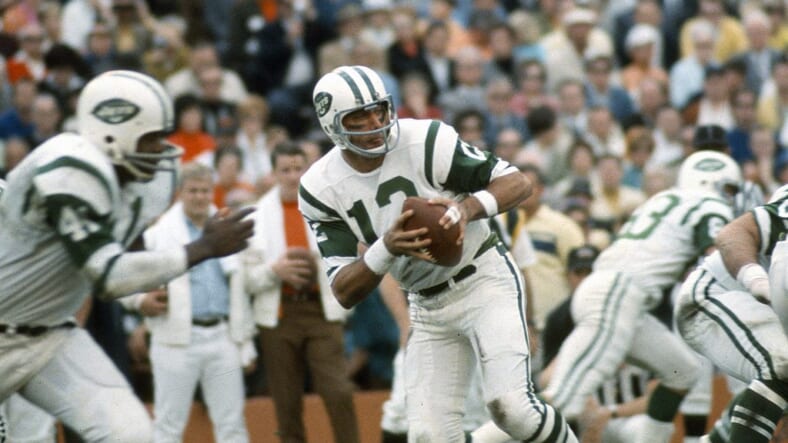 MIAMI, FL – JANUARY 12: Joe Namath #12 of the New York Jets drops back to pass against the Baltimore Colts during Super Bowl III at the Orange Bowl on January 12, 1969 in Miami, Florida. The Jets defeated the Colts 16-7. (Photo by Focus on Sport/Getty Images)

With the NFL draft one day away, the Jets find themselves with an early first-round pick at number 11. The team has had a mix of studs and busts in their history of first-round picks. Players, such as Jamal Adams, will not be mentioned because of their short careers thus far. Let’s take a look at some of the best, and worst, all-time picks the team has made in round one:

Broadway Joe is the most iconic Jet in their history and, perhaps, one of the most iconic players in league history as well. Known for his guarantee that the Jets would defeat the Colts in Super Bowl III, he won the only Lombardi Trophy in team history. Namath threw for 27,057 yards and 170 touchdowns during his 12-year career in New York. The Hall of Fame quarterback remains the most significant draft pick in Jets history.

Revis played eight years with New York in two separate stints. During his first stint, he was arguably the best cornerback in football. Being selected to four Pro Bowls in his first six years, he earned the name “Revis Island” along the way. He also helped lead the team to back-to-back AFC Championship games in 2009 and 2010. Eleven seasons and 29 interceptions later, Revis was rightfully named to the 2010’s All-Decade Team.

Taking over the offensive line and replacing Hall of Famer Kevin Mawae was no easy task. However, once he took over in 2006, Mangold added himself to the list of best centers in the league. Mangold played 11 seasons with the Jets and made seven Pro Bowls while starting all but 12 games. To put that in perspective, he played, and started 164. The all-time great Jets lineman is among the best first-round picks.

McNeil played alongside quarterback Ken O’Brien for New York in the 1980s. He was a three-time Pro Bowl selection and led the league in rushing yards in 1982, although the season was shortened due to a strike. While playing his entire 12-year career with the Jets, he amassed 38 rushing touchdowns and 8,074 rushing yards, which is second in team history behind Curtis Martin.

Toon played his entire eight-year career with the Jets before he retired due to multiple concussions. He ranks fourth in team history with 517 receptions and led the league with 93 in 1988. The 1986 AFC Player of the Year totaled 6,605 yards, 31 touchdowns, and three Pro Bowls during his career.

The sixth overall pick in 2008 ended up starting just five games in three seasons with the Jets. Additionally, he never earned a single sack and had just one quarterback hit. The defensive end never lived up to the expectations. Other players that were on the board were Chris Johnson, Aqib Talib, and Jordy Nelson, to name a few.

Drafting anyone with the second pick, let alone a running back, is going to bring along high expectations. Thomas was drafted to lead the Jets’ rushing attack but never produced. He never had more than 800 yards in a season and had just six touchdowns throughout four seasons. Another running back they could’ve taken here? Emmitt Smith.

Here we go again. Another second overall pick that didn’t pan out. The Jets didn’t originally have this pick, but traded picks 13 and 20 to get him. Through five years in New York, Jones had just 13 touchdowns, which is just over two per season. NFL Hall of Famer Anthony MuÃ±oz was available as well.

The Jets have never had much luck with tight ends, but Brady is towards the bottom of the list. In 63 games, Brady had just 10 touchdowns. In 1996, he started all 16 games but had just 15 receptions all year. Who else was available? NFL Hall of Famer Warren Sapp.

Being pinned as the replacement for Darrelle Revis is a tough spot to enter into, especially for a rookie. Milliner, who dealt with some injuries, played just 21 games through three seasons, starting 14. It’s safe to say that Dee Milliner was not, in fact, Darrelle Revis 2.0. Just four picks later, the Jets took Sheldon Richardson, who ended up elsewhere.

With the number 11 pick in tomorrow’s draft, the Jets have the opportunity to add to this list. Whether it be because of a great pick or a bust, someone new will be donning the green and white next season.