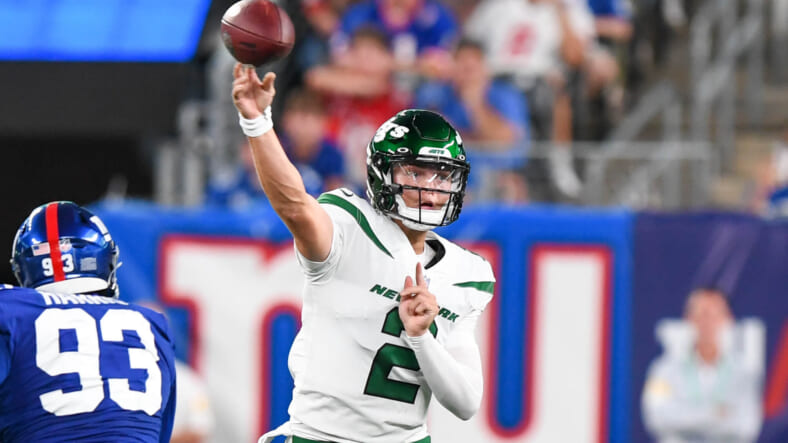 Never mind Labor Day. For New York Jets fans, the unofficial end of summer arrives when the Philadelphia Eagles show up on the preseason ledger.

The Jets’ late-summer showcase with the Eagles resumes on Friday night at MetLife Stadium (7:30 p.m. ET, WCBS). New York (2-0) has faced Philadelphia (0-2) in every preseason finale since 2001. The streak was interrupted only by the cancellation of last year’s preseason proceedings but resumes on Friday night in what goes down as the Jets’ only official home game of their 2021 exhibition showings (they were the designated road team in the opener against the Giants).

Losing Carl Lawson for the year (and Jarrad Davis for at least the first five weeks) shouldn’t awaken the Jets from their dreams of development this season, but the first showing sans the former Bengal wasn’t pretty. Missing Lawson wasn’t the biggest issue against Green Bay last weekend…missing tackles and lost coverage battles were far more troubling…but the top unit still looked out of sorts against a Packers offense resting most of its starters (including top throwers Aaron Rodgers and Jordan Love).

The ultimate insult came when the Packer reserves ate up ten minutes of second quarter game time and embarked on a 19-play, 81-yard drive. Six of those plays were conversions on third or fourth down, including the touchdown that capped things off. Since that drive came with a good portion of the Jets starters on the field, the team faces some major questions.

Even if their conquests have come against defensive reserves, it’s hard not to be enthused about the progress of the Jets offense, especially with Zach Wilson leading the charge. The team has drifted so far behind the times in this NFL dominated by offense: this is a unit that failed to reach a mere 300 yards in all but five of their games last season. Wilson has embarked on six drives this season: the Jets have scored on four of them and all but one has ended in opposing territory. The outlier produced a conservative punt on a one-yard fourth down at the Jets’ 49-yard-line.

Wilson has made the most of his summer opportunities. He has built chemistry with his receivers, namely Corey Davis (6 receptions, 88 yards) and Tyler Kroft (49 yards on a trio of receptions, including two touchdowns in Green Bay). He has responded well to adversity, erasing two deficits at Lambeau through responsive scoring drives.

Time will tell how the Jets, and their 31 NFL compatriots, approach the third preseason game under the adjusted, shortened summer format. Under the previous quartet, the third game was often treated like a dress rehearsal, with starters playing most, if not all, of the first half.Â Head coach Robert Saleh was vague on his starters’ playing time during joint practices with the Eagles this week but stressed his desire to see a lot of Wilson. It won’t be “more than a half”, per team reporter Ethan Greenberg, but Saleh believes that there’s a prime opportunity for the newcomers on offense to make of the most of the final tune-up of what’s been a successful preseason.

“I want to play (Wilson),” Saleh said in Greenberg’s report. “I do, so we’re talking about it. But right now, I’m leaning towards playing at least the starting offensive line, quarterback, and a majority of the defensive payers…We got a ridiculously youngÂ teamÂ and they are growing and learning and all of these experiences are so important to them. I feel like they’ve gotten so much better from the first day of camp until now and to pull off now, I think we’d be doing them an injustice.”

If the Jets emerge from this preseason feeling good about themselves, the offense is providing a majority of those good vibes. Keeping up the offensive is more important than ever with so many question marks filling up slots on the defensive depth chart.

Friday also presents a big opportunity for some players to secure premier roles on the team. Who will be the top rusher? Veteran and two-time Super Bowl participant Tevin Coleman is currently slotted in the top rushing role on the official depth chart but Michael Carter, Ty Johnson, and La’Mical Perine have each looked strong at different points of the summer. The backup quarterback debate has yet to be resolved as well. Mike White has been quiet if not consistent but sustained a rib injury in Green Bay last weekend. James Morgan has struggled and veteran Josh Johnson has yet to see the field.

Well, it’s here. The final 2021 preseason game and, believe it or not, there is still one important question that needs answering: what’s going to happen at linebacker behind C.J. Mosley?

The linebacking situation seemed set. It was going to be Mosley and Jarrad Davis manning the main two inside spots. However, with Davis going down for about two months, there’s a hole. The news wasn’t wanted by anyone, but with the injury comes new opportunities for other players. These opportunities could be exciting too, as rookies Jamien Sherwood and Hamsah Nasirildeen will have prime chances to impress.

Sherwood, Nasirildeen, and the veteran depth at linebacker (i.e. Blake Cashman, Noah Dawkins) need to help create some post-Davis clarity on Friday night. If the Jets linebackers can show some ability to make impactful plays and stand tall with the added adversity, it’ll end the preseason on a relatively high note. Well, as high as it could be now.

Expect the linebackers to rotate in and out frequently and to get a glimpse of everything they have to offer. Hopefully, they will be able to achieve the goal of clarity somewhat quickly.