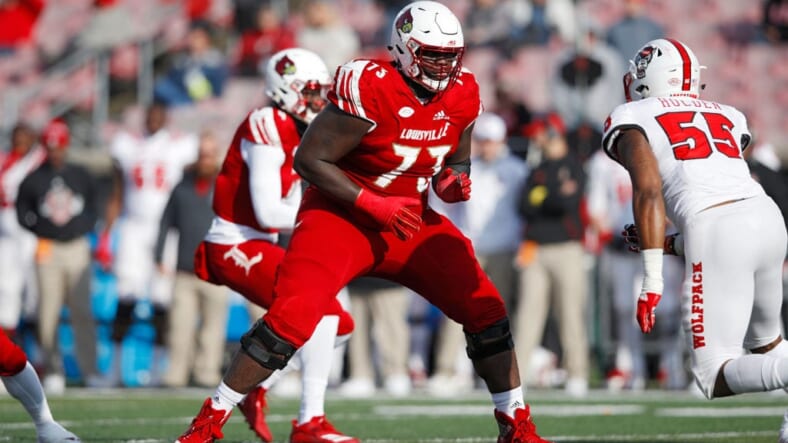 The New York Jets got a massive human being in Mekhi Becton, and Adam Gase is extremely happy about it.

The 2020 NFL draft was clear cut for the New York Jets, who desperately needed offensive line help to protect quarterback Sam Darnold. Investing a high round pick in a passer requires management to build around them and support them at all costs. General manager Joe Douglas did just that by selecting Mekhi Becton with their first-round pick.

Gase was also on board with Becton, expressing his initial interactions and excitement, per the New York Post.

â€œI think heâ€™s a guy that can help us both in the run game and the passing game,â€ Gase said of Becton, who is 6-foot-7, 364 pounds. â€œWhen youâ€™ve got a guy that size â€¦ when you meet him, thatâ€™s the first thing you notice, you just go, â€˜Wow, this is a very big human being.â€™ I loved the first meeting we had with him at the combine.

â€œBefore all this stuff was shut down, we got to sit down in Indy and go through some film with him. One of the first plays [offensive line coach] Frank [Pollack] had on, it was a run play and heâ€™s pushing this guy. I mean, theyâ€™re 20 yards down the field. He might have given him a little late shove there â€¦ and Frank was kind of like, â€˜a pretty good finish but a little late here.â€™ He goes, â€˜Well, he should have thought about going down.â€™ I was like, â€˜I like this guy.â€™ This guy has something to him. This guy has some nastiness to him. Heâ€™s the type of guy you want to be around.â€

Becton entered the draft as one of the biggest linemen available. At 6-foot-7 and 364 pounds, the offensive tackle rated as one of the best in the draft class and was an easy selection for Gang Green. He will man the left tackle spot while new signing George Fant from the Seattle Seahawks will take over at right tackle.

While a few holes are remaining on the offensive front, Darnold can be confident that his protection scheme will be far improved in 2020. Having been sacked over 60 times in the past two years, it was about time the Jets allocated ample resources toward solving this group.