New York Jets: A player at each position in a make-or-break year (Offense) 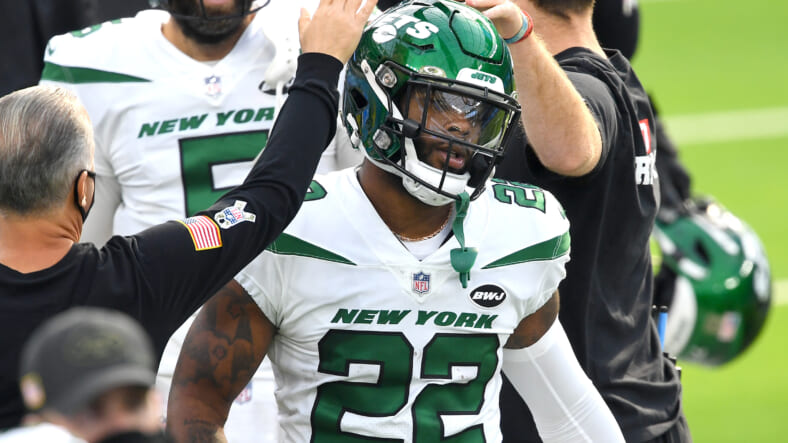 This New York Jets season comes with the aura of having nothing to lose. But 2021 could mean everything for these offensive cases.

Bob Dylan’s line in the final verse of his signature hit “Like A Rolling Stone” might well apply to the 2021 New York Jets as a whole. Burdened with the NFL’s longest active playoff drought and trapped in a division with an apparent Western New York juggernaut, no one would blame the Jets for going through a gap year of sorts in an AFC packed with established contenders.

Little more needs to be written about James Morgan’s rookie year…or lack thereof. The fourth-round pick out of Florida International didn’t even get to wear his game jersey last season, as he was not only a healthy scratch for every game last season, but he didn’t even have the luxury of a preseason.

With a shortened exhibition slate on the horizon, it’s likely that Morgan will finally get a chance to show what he’s got. The Jets appear to be sticking with Morgan and Mike White…and their grand total of zero NFL regular season snaps between them…for their backup battle behind Zach Wilson. White, a 2018 fifth-round pick in Dallas, at least has a couple of preseason under his belt from his time with the Cowboys.

Morgan’s season-long benching, even when the Jets had literally nothing to lose, became more puzzling with each passing contest. Gabriel Davis, L’Jarius Sneed, and DeeJay Dallas were all among those who went within the ensuing 20 packers after Morgan went 125th overall. The coming preseason will be anything but irrelevant for Morgan.

It was silly enough not to at least dress Morgan for the latter portions of the Jets’ season. But if that was negligence, the Jets’ malpractice at running back was downright criminal.Â By this point, even the most casual Jets fan knows about the Frank Gore farewell tour Adam Gase produced after Le’Veon Bell’s release. That endeavor wiped out free research and development for the Jets’ trio of young rushing projects, a group headed by Perine.

The NFL career of Perine, chosen five picks before Morgan, is slowly falling victim to the faultless crime of being in the wrong place at the wrong time. Gase’s uncanny dedication to Gore wasn’t even the start: he missed the start of the season due to a leg injury suffered late in training camp. Just when he looked like he was building a rhythm (opening Week 11’s visit to Los Angeles with 33 yards on eight carries, one of which was a score), he endured another ankle injury that kept him out of the next four games. He returned for the penultimate game of the season but missed the finale due to placement on the COVID-19 list.

That trend appears to be continuing as his sophomore season gets underway. Perine was drafted to be a north-south option, which clashes with the agility preferred in Mike LaFleur’s system. His fellow young projects (Ty Johnson and Josh Adams) are also back while the Jets added North Carolina product Michael Carter in the most recent fourth round. Gase and Gore are gone but Perine nonetheless finds himself in a precarious position.

It’s truly unfortunate that injuries are held against athletes, particularly those on the gridiron, when judging their careers. Entrants like Ki-Jana Carter, Robert Griffin III, Sam Bradford, and Steve Emtman are often considered busts if for no reason other than committing the apparently mortal sin of getting hurt while playing football.

Mims is teetering on such an unjust fate. He missed the first six games of his rookie campaign after injuring both of his hamstrings before Week 1 and was thus struggled to sustain freshman momentum. A New York offense in various states of disarray certainly didn’t help his case. Hints of Mims’ big-play potential briefly emerged, but that didn’t stop the Jets from spending big offseason bucks to build their receiving corps. Mims is now suddenly trapped behind the hype of Elijah Moore and Corey Davis.

More struggles awaited Mims as preparation for 2021 got underway, as he missed time with an illness and spent minicamp on the second team. The drafting of Mims (and, of course, the performance of first-rounder Mekhi Becton) was supposed to make up for the fact that the Jets passed on elite receiving talent (including future Rookie of the Year Justin Jefferson) during the 2020 draft’s first round. With the receivers’ room looking vastly different, Mims must separate himself from the pack.

It was a little surprising (yet ultimately financially sensible in the long run) to see that the Jets didn’t break open the bank for some stronger competition at tight end to raise the heat on Herndon. Injuries and a suspension have prevented him from capitalizing on a strong debut season but the Jets passed on expensive names like Jonnu Smith and Hunter Henry (both newly minted Patriots). Goal-line option Tyler Kroft, the re-signing Daniel Brown, and rookie free agent Kenny Yeboah served as consolation prizes (along with the returning Ryan Griffin and Trevon Wesco).

But minicamp saw Herndon lose valuable starting reps to Kroft, setting up an intriguing battle once training camp begins. Per Connor Hughes of The Athletic, Herndon has struggled with his new playbook, causing him to lose valuable ground on the depth chart.

To his credit, Herndon is going the extra mile to rectify his mistakes prior to his vastly important fourth season, as he is reportedly attending the Tight End University summit in Nashville. It will mean nothing, however, unless his work starts to make itself apparent on the field.

Several Jets blockers might be at their New York breaking points in 2021. Potential outs lie in the contracts of Fant, Greg Van Roten, and Connor McGovern, outs that would lead to over $20 million cap savings.

Fant is a late addition to this and is in a particularly prickly situation after the team signed Morgan Moses last week. Moses, coming off a career-best season in Washington, is projected to take over the right tackle spot, which would relegate Fant to the second team. Set to turn 29 this month, that could hinder Fant’s chances of securing another long-term deal.

But a new opportunity awaits: Fant could prove himself to be a reliable depth option and veteran mentor, which could convince the Jets or another team to offer him that presumably desired stability. To do so, Fant could look to pull out all the stops. For example, is it possible we could see him lineup as a tight end, as he did in Seattle? LaFleur’s offense in San Francisco previously used a veteran blocker in such a role, employing the services of Joe Staley.