New York Jets: A player at each position in a make-or-break year (Defense) 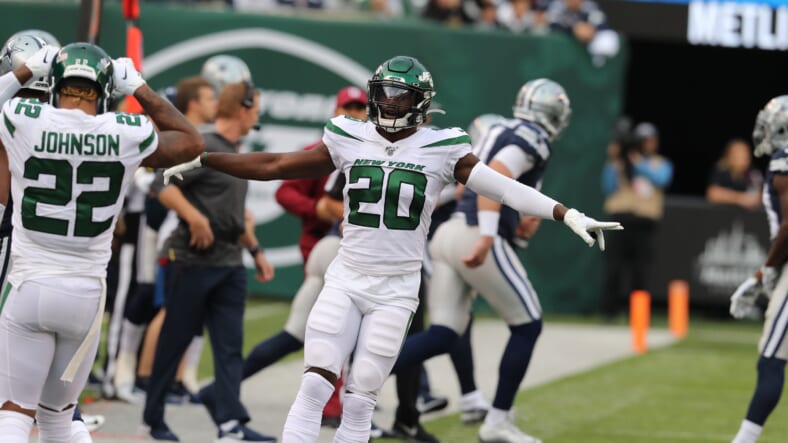 EAST RUTHERFORD, NEW JERSEY - OCTOBER 13: Safety Marcus Maye #20 of the New York Jets celebrates a stop against the Dallas Cowboys in the first half at MetLife Stadium on October 13, 2019 in East Rutherford, New Jersey. (Photo by Al Pereira/Getty Images)

No one’s expecting much from the 2021 New York Jets, who thus have little to lose. These defenders, however, would beg to differ.

The symptoms of dealing with the New York Jets’ endless search for a franchise quarterback have often been treated with a healthy dose of defense.

This offseason brought about an interesting irony: the Jets appear to have their new franchise man in Zach Wilson under a defensive-minded head coach in Robert Saleh. While they surrounded Wilson with plenty of talented, developmental pieces through both free agency and the draft, the defense is a relatively muddled hodgepodge of veterans both arriving and returning. After all, the Jets waited until the fifth round of the draft to address the defense, using the 146th overall pick on Auburn secondary man turned linebacker Jamien Sherwood.

Though New York has relatively little to lose in 2021 as a team…few expect them to rise out of the AFC East cellar…the defense is full of veterans looking to prove themselves, justifying their metropolitan existence for the potential good times ahead. ESM has a player from each position group to keep an eye on in that regard…

Phillips was one of the green breakout stars of the 2019 season. During the Jets’ second half mirage…a long-forgotten 6-2 stretch earned mostly against teams in even more dire straits…the undrafted Phillips was particularly impressive as a run-stepper.

Pro Football Focus graded him 17th amongst edge rushers in run defense and Phillips earned further notoriety when he picked up a crucial sack in a win over Pittsburgh in the Jets’ home finale (to date, their last game with fans at MetLife Stadium). His pass rushing skills left much to be desired, but the Jets were very satisfied with the value found in the rookie free agency pile.

Unfortunately, Phillips was unable to capitalize on his rookie success, as he partook in only six games last season due to an ankle injury. In his place, the Jets’ front seven enjoyed a few breakout years amidst the chaos of Adam Gase’s last stands. Most of the attention went to Quinnen Williams but John Franklin-Myers held down the fort in Phillips’ absence.

Phillips is an interesting situation, but the arrival of Saleh and his 4-3 tendencies should provide some stability. While Phillips moved around a lot in Gregg Williams’ 3-4 looks, he should be seen in his traditional role on the line at end more often. But with the Jets bringing in veterans Vinny Curry and Ronald Blair through free agency, immediately getting his primary duties back is no guarantee.

Conventional wisdom says that the New York linebacker most desperately facing a make-or-break season is C.J. Mosley, who has appeared in two games over his first two New York seasons due to medical absences. The former Baltimore Raven already faces a tall task as one of the final marquee signings of the Mike Maccagnan era. But even if this year doesn’t work out for Mosley (who nets the Jets $13 million if they trade him after this season), his previous resume (four All-Pro nominations) shouldn’t make it hard for him to find another job elsewhere.

Davis, the Detroit Lions’ 2017 first-round pick (21st overall) doesn’t have quite that luxury just yet. His NFL career got off to a decent start under the reliable watch of Jim Caldwell and Teryl Austin but fell apart amidst the toxicity of the Matt Patricia era. A one-year “prove-it” deal bestowed by the Jets has given him a chance to get his career back on track…and the 4-3 gives him the perfect opportunity to do so.

Davis’ best showings have come in the 4-3, first under Geoff Collins as a Florida Gator before working in Austin’s system in the Motor City. It provides a chance to not only post some strong stats but showcase his leadership skills, as his experience in Saleh’s preferred set can be used as a safety blanket. But if he struggles this time around, it will probably become difficult to extend his NFL career further.

For all intents and purposes, Queens native and Rutgers alum Bless Austin was born to succeed as a New York Jet. He overcame injury issues in Piscataway (limiting him to five games in his last two seasons as a Scarlet Knight) to become an NFL draft pick and did well for himself when some veterans ahead of him weren’t up to snuff. He partook in 11 games last season, the most since a sophomore season that saw him finish second in the Big Ten in pass breakups.

Over his first two NFL seasons, Austin has developed a reputation as a strong hitter but has struggled in coverage. Those issues could prove especially deadly in year one of Saleh and new defensive coordinator Jeff Ulbrich’s watch, as the duo have been known to run zone schemes. Austin has fared slightly better in man sets, but hasn’t shown anything to suggest he’s ready for full-time starting duties at the NFL level.

The Jets were in such a macabre situation after last season that they had to sacrifice some areas in their 2021 renovations. Cornerbacks are by far the most exposed group. Free agent arrival Justin Hardee is expected to contribute more on special teams while returnees Corey Ballentine and Bennett Jackson are low on experience. The Jets did spend a majority of the draft’s final day on secondary help, bringing in Jason Pinnock, Michael Carter II, and Brandin Echols, not to mention the undrafted Isaiah Dunn.

Austin is currently set to be the top man next to Bryce Hall. While the second-year Hall has time to develop, Austin is facing a more desperate situation with younger prospects behind him.

Once the necessary Adams divorce was finalized, Maye was tasked with not only being a defensive leader but for keeping the ensuing season at least somewhat tolerable. Maye did that and then some, enjoying a strong season that at least kept the Jets in the SportsCenter Top 10. The 2020 campaign also ended with his name on the Curtis Martin Team MVP Award.

The issue with accolades, especially club-based honors, in a two-win season is the question of whether the award says more about the honoree or the team. It seems like Maye has the talent and skillset to remain an NFL staple for the foreseeable future. Pro Football Focus’ Sam Monson in fact ranked Maye as the seventh-best safety in football entering 2021…three spots ahead of Pacific Northwest-dwelling friend and former teammate.

Jets management apparently still isn’t convinced that Maye, one of only two Maccagnan draft choices slated to start on defense this (Austin is the other), is the future. Long-term contract talks appear to have broken down and there have been no developments with the deadline eight days away. In the meantime, Maye’s desire for a big payday has been temporarily satisfied through a franchise tag granting him just over $10 million, making him the sixth-best paid safety this season (tied with Marcus Williams in New Orleans).

A big season thus lies ahead for Maye, who will be looking to prove to both the Jets and their 31 brothers that he can be a vital contributor on a respectable NFL squad. If he carries on the promise of last season and makes MVP endeavors the new normal, he won’t have to worry about the desired money and stability for a long time. But if he falters, his price tag could take a slashing.

Who else is facing a make-or-break season? Continue the conversation on Twitter @GeoffJMagsÂ