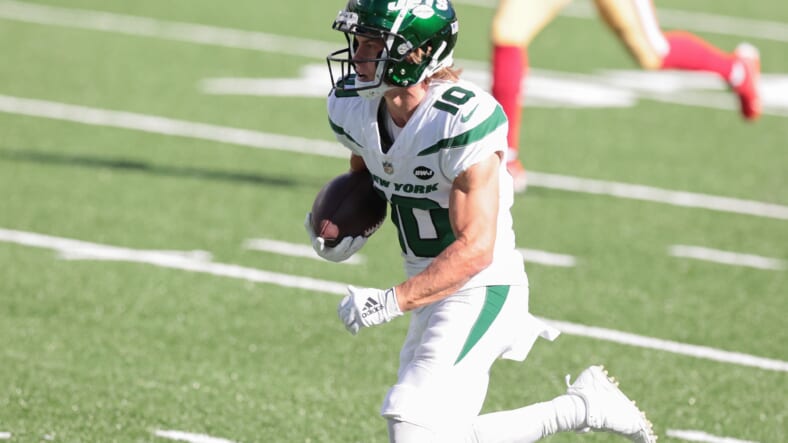 The New York Jets claimed Braxton Berrios through waivers shortly before the start of the 2019 season. Each year Berrios has been with the Jets, he has gotten better. It led to a nice two-year contract extension with the team in free agency. Berrios is one of the Jets’ longer-tenured players now entering year four with the team. He is going into his fifth year in the NFL and will turn 27 in October.

Berrios is coming off a career year. On special teams, he led the league in average kick return yardage with 30.4 yards a return. In turn, he earned first-team All-Pro kick return honors. Also, Berrios ranked second in average punt return yardage with 13.4 yards per return. Offensively, Berrios has his best year in 2021. He was targeted 65 times, caught 46 passes for 431 yards, and recorded two touchdowns. He also had seven carries go for 40 yards and two touchdowns. Berrios scored five total touchdowns last year between receiving, running, and returning. Berrios carved out a role for himself and proved his fit in the offense run by Mike LaFleur.

Berrios is 5-foot-9 and 190 pounds. He has fast 4.44 speed. Berrios possesses good quickness as well, which he uses as a route runner. He displays both his speed and quickness with the football in his hands, whether it be receiving, running, or returning. One of Berrios’ best attributes is how dynamic he is with the football in his hands. He also showed very good improvement catching the football with his hands last year. Overall, Berrios offers the Jets a ton of versatility. Whether it be in the passing game, as a runner in a gadget role, and of course on special teams where he has returned both kicks and punts all three years he has been a Jet, Berrios provides the Jets with a lot of multiplicity.

On special teams, Berrios will remain a core player for Brant Boyer’s unit as a kick and punt returner. Offensively, he provides great depth for the Jets at wide receiver behind Elijah Moore, Garrett Wilson, and Corey Davis. Even with these three, expect Berrios to still get his opportunities. He fits well in LaFleur’s offense. Berrios can play in the slot or as a gadget player on-orbit motions and in the screen game with his ability to be dynamic after the catch. As the fourth receiver of the group, still expect a good chunk of snaps a week for Berrios, particularly in three-wide receiver sets.

Going into year four in a great scheme led by a terrific coach in Boyer, anticipate Berrios ranking toward the top of football in average kick return yardage again. Based on his consistent production over the last two years in the passing game, expect roughly 60 targets (3.5 per game), 40 catches, 400 yards, and two or three receiving touchdowns for Berrios. He should get some added opportunities in the running game as well.

Berrios has proven his value as a very solid Jet in a multitude of ways. Expect splash plays with his role as both a returner and versatile skill player for the Jets offense. Anticipate him continuing to make the most of his opportunities on offense. In 2022, Berrios will continue to show improvement and be a core contributor in his fourth year with the Jets.