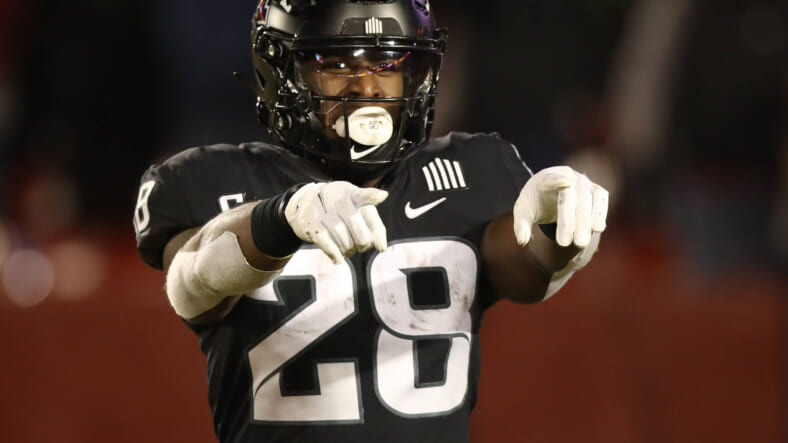 The New York Jets drafted Breece Hall in the second round of the 2022 NFL draft. The running back was one of the many thrilling early selections for Jets fans. Hall is a young rookie who will play his first season at 21 years old. He is entering into a great situation to thrive and make his impact felt right away for the Jets in year one.

Hall is coming off an extremely productive three-year college career at Iowa State. He finished with a total of 3,941 rushing yards, 5.5 yards per carry, and 50 touchdowns in 36 games played. In 2021, he had by far his best year receiving with 36 catches, 302 yards, and three touchdowns. Over his last two seasons, Hall had over 1,450 yards rushing and at least 20 rushing touchdowns.

Hall offers a relatively complete skill set to the Jets offense for Mike LaFleur. As stated, he has a great size and speed combination. He also provides quickness, contract balance, and receiving ability. Simply put, Hall can generate big plays for the Jets at any given moment. He has the capability to run inside with his size. Two important attributes for LaFleur’s outside-zone running schemes, patience and vision, Hall has as well. With his pass-catching ability, Hall can be utilized on all three downs. As a runner, not only does Hall defeat tackling attempts with great contact balance, but he also has shifty elusiveness in space to make pursuing defenders miss.

The reps Hall takes for the Jets offense will be significant from the jump right away in Week 1 as a rookie. He and Michael Carter will both have integral roles this year. Hall will likely be featured more significantly, though. Between the run and pass game, anticipate roughly 15-20 total touches for Hall per week. There could be a rotation between him and Carter where one takes early downs, and then the other comes in on third, knowing they can both help as receivers. Or, there may designate a series at a time to one of them. Either way, Hall will be tremendously involved.

As recently stated, Hall seems slated to get 15-20 total opportunities a game. If so, Hall will probably finish his first year with 250-275 total touches. If he plays in all 17 games, he should finish with roughly 1,200 to 1,300 total yards from scrimmage with about eight to 10 total touchdowns. Rushing for 1,000 yards in year one would be incredible, and it is attainable for Hall. Expect some solid production in the passing game too. Lastly, averaging at least 4.5 yards per carry would make for an ideal start to Hall’s young career.

Hall will provide a ton of immediate excitement to this young Jets team as a rookie himself. Expect a substantial impact early on. Hall is a very talented and complete running back. As Zach Wilson and LaFleur enter a pivotal year two together, Hall should help make things easier on them both. As a running back duo, the potential of Hall and Carter together is exciting to think about. In year one with the Jets, Hall will be a productive player.