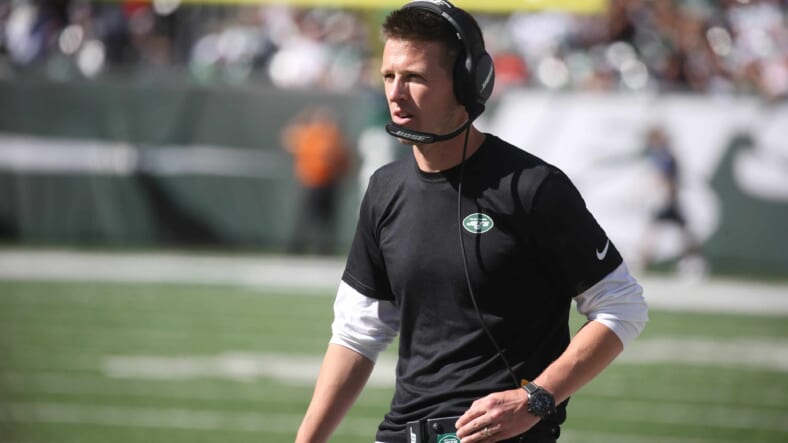 Mike LaFleur was hired by the New York Jets in January of 2021 to be the offensive coordinator. He was brought in along with Robert Saleh when he became the head coach. The two had spent the past four years with the San Francisco 49ers. Their relationship also stems from the fact that Saleh is best friends with Mike’s brother Matt LaFleur, head coach of the Green Bay Packers. LaFleur is going into year two with the Jets calling plays for the offense with some exciting expectations from the fan base.

The start to LaFleur’s play-calling career got off to a rough start. Over most of the first six games of the 2021 season, the Jets’ offense struggled. It was a challenge that LaFleur took the right way. Amongst strong public criticism, he showed great accountability and leadership any time he met with the media. He clearly stayed true to the process and took the development one day at a time.

Finally, in Week 8, things started to click for the Jets’ offense. LaFleur called his first game that resulted in 30 points, and ultimately a Jets win against the soon-to-be AFC Champion Cincinnati Bengals. In most of the Jets’ games throughout the back-half of last season, LaFleur had some great moments leading the offense. As a play designer, LaFleur proved his creativity and a willingness to be innovative and aggressive.

Ultimately, the offense ranked 26th in the NFL last year. LaFleur helped Zach Wilson grow and get comfortable as the season progressed. Wilson played at a high level in the second half of the win against the Tennessee Titans. He played his best and most complete game against a great Tampa Bay Buccaneers team in Week 17 with minimal help around him.

LaFleur’s offense got career years out of George Fant and Braxton Berrios. Connor McGovern had a solid bounce-back year. Along with Wilson, rookies, Michael Carter, Elijah Moore, and Alijah Vera-Tucker all had promising glimpses.

A few of LaFleur’s top attributes as a coach are his scheme, talent designing plays, strong coaching relationships, and youth. The system run by LaFleur is the most popular modern-day offense in the NFL. It is built on running the football with wide-zone blocking. From there, he sets up play-action off it making the run and play pass look the same. It is a quarterback-friendly scheme. LaFleur also incorporates pre-snap motioning and creativity for his skill position players to get the ball and make life easier on the quarterback. As mentioned, he displayed his skill of being able to draw up unique plays and the ability to think outside the box.

In terms of relationships, his brother, Matt, has had three 13-win seasons in three years with the Packers. Before joining the Jets in 2021, LaFleur had spent all seven of his NFL coaching years with Kyle Shanahan. The philosophies they all have offensively are similar and have attained great success.

LaFleur is a very young coach at 35 years old. Just recently, he was given recognition as he was a part of a top 40 coaches, executives, and agents list that consisted of anyone under 40 years old.

Significant expectations are in place for LaFleur entering his second year with the Jets in 2022. Continued growth should be evident in his handling of calling plays in-game with his year of experience now. The offense should be prepared and consistently start games fast. He undoubtedly has better talent to work with, which should only accelerate his own development. The team should have more big plays, high-scoring games, and fun moments overall.

Knowing how pivotal two tight end sets are in his system, now, having three who can all block should go a long way. With Laken Tomlinson and Mekhi Becton, the running blocking should be better. Lastly, having the young duo of Breece Hall and Michael Carter, who both fit the LaFleur scheme, could be something special.

The main thing for LaFleur will, of course, be the development of Zach Wilson. If Wilson grows, LaFleur should have this unit in the top 20 and potentially even break into the top 15 in the NFL this year if all goes well.

LaFleur will likely have a successful 2022 for the Jets. He should be one of the reasons why the Jets are a fun team offensively to watch this year. Will all of the skill position talent, LaFleur should generate many explosive plays. The Jets offense should have some dominant offensive performances that show up on the scoreboard, stat sheet, and most importantly, in the win column. LaFleur is integral to the drastic improvement the Jets should accomplish in 2022. LaFleur has an exciting future with the Jets.