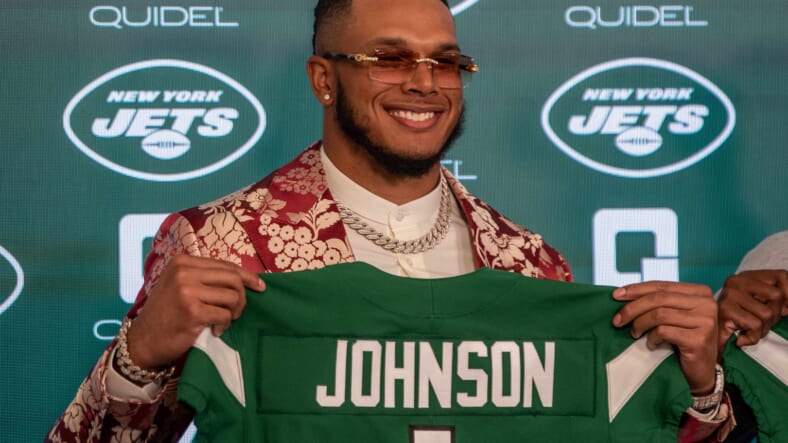 The New York Jets traded up into the first round of the 2022 NFL draft to acquire talented edge defender Jermaine Johnson to cap off their thrilling first round. He will play his first year with the Jets as a 23-year-old. This offseason, the Jets needed edge help against both the pass and run. Johnson brings just that. He is in a position to have a productive first year.

Johnson can stop the run and get after the quarterback. He uses his size and physicality on the edge to set the edge in the running game and make plays. He should have an immediate impact as a run defender. As a pass rusher, Johnson is able to win with his size, speed, and athletic ability. Even further, he is able to beat tackles rushing with power, bend, or a variety of moves. Going forward, the key will be having a consistent pass rush plan on every rep. Once he does, Johnson has all the talent and technique to be special.

With his run-stopping ability, Johnson will play right away for the Jets’ defense on first and second down. He should help this aspect of the Jets defense that struggled greatly a year ago. As a pass rusher, Johnson will get his opportunities in key situations on third down and late in games but will still be a part of a deep rotation that Robert Saleh and Jeff Ulbrich will mix and match.

Johnson should post some good stats by the end of his rookie year. As a pass rusher, recording five sacks and around 35 to 40 pressures (roughly two per game) would be an ideal start for Johnson. His impact as a run defender should show up on the stat sheet as well. He should total about seven tackles for loss in year one.

Johnson has the talent and character to have a productive rookie year with the Jets. He has great physical traits and athletic ability as a young player at a premium position. His skills as a run defender should be on display from the jump. Developing a consistent rush plan will be the main point of emphasis for Johnson in his development throughout year one. Johnson is a big piece to the long-term future of the Jets. He will have a good first year in 2022.