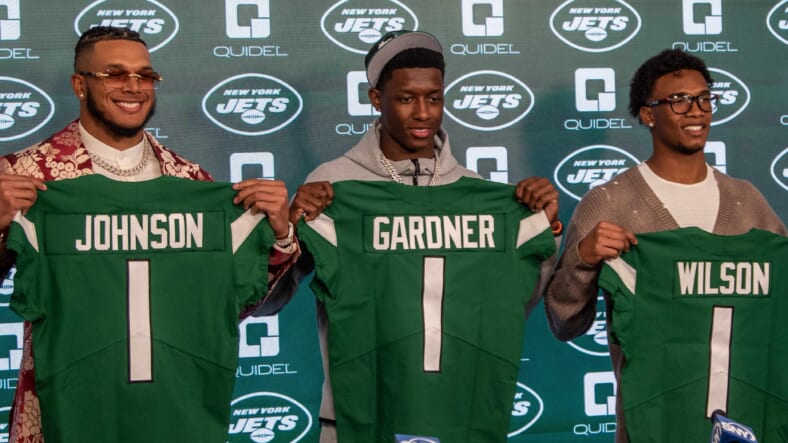 The New York Jets started their big 2022 draft class with the selection of star cornerback Sauce Gardner. Gardner was a highly successful player in college with the talent and character to be great from the jump of his career with the Jets. He enters his rookie year, turning 22 late in August. Based on Gardner’s incredible pedigree, anticipate a very good first year of production from Gardner in 2022.

It is well known that Gardner did not allow a touchdown throughout his college football career at Cincinnati. Over his three years at Cincinnati, he played in 33 total games. Each season, he recorded three interceptions. In his freshman and sophomore years, he had six passes defended. Gardner had four passes defended as a junior. In 2021, Gardner had five tackles for loss and three sacks as well.

Gardner is the prototypical press cornerback. He uses his height and length to his advantage. Gardner is physical with wide receivers on the line of scrimmage. Not only can he jam in press coverage, but Gardner has the athleticism to quickly turn and the long speed to stay with wide receivers in phase. Gardner is a tough and competitive player who always plays with high-level effort. He is willing to come up and make tackles, as shown by his five tackles for loss and three sacks last year.

Gardner will start for the Jets on the outside at cornerback in Week 1. He has everything it takes in terms of past production, talent, character, and competitive nature to make an immediate impact. With D.J. Reed excelling as a right cornerback last year, Gardner will likely play as the outside corner on the left side of the formation. That being said, in certain situations, it will be fascinating to see if the Jets are willing to move Gardner across the field to match him up against opponents’ top wide receivers. Either way, Gardner will be expected to make plays right away for the Jets’ defense.

In coverage on the football, Gardner will make splash plays as a rookie. In terms of breaking passes up, anticipate roughly a dozen and even potentially up to 15 passes defended in year one from Gardner if all goes well. When it comes to generating turnovers, something the Jets defense needs, expect Gardner to pick off at least two to three passes as a first-year player. A stat line in coverage of at least 12 passes defended and three interceptions at a premium and challenging position to play like cornerback would qualify as a very strong start to Gardner’s young career. It will be fun to see how long he can keep his no touchdowns allowed. Lastly, knowing his ability to come up and make plays with his size and physicality around the line of scrimmage, Gardner should record a few sacks and tackles for loss as well.

Gardner was a remarkable draft prospect who now projects to be one of the faces of the Jets franchise for a decade. He is a key long-term player for the organization. Gardner has everything one could ask for in terms of leadership, work ethic, pedigree, and talent. He is a plug-and-play starter as a rookie who will make impact plays from the start. On the field, his size, speed, athleticism, and competitiveness are all special attributes to Gardner. In 2022, Gardner is going to have a big rookie year for the Jets.