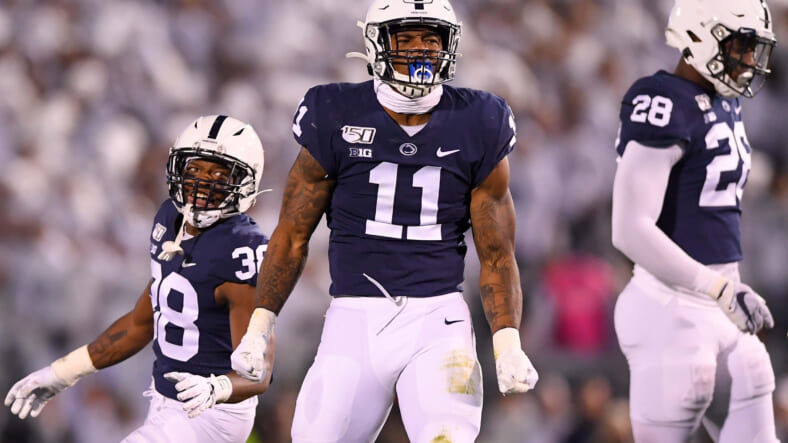 Despite the enjoyment of August baseball, it’s never too soon to talk about the next NFL Draft. The New York Jets will certainly need to prep for this upcoming draft, as they’ll now have two first-round selections following the Jamal Adams trade. Judging by the state of the league, it also stands as a very real possibility that the Jets are drafting near the top of the order. So, I wanted to begin highlighting a couple of targets for the Jets in the 2021 draft.

Who is Micah Parsons?

Micah Parsons has been a member of the Penn State Nittany Lions since 2018. From Harrisburg High School, Parsons was a highly-touted athlete in his recruiting class. As he’s transitioned over the past two seasons to college football, he found his niche as a new age linebacker. Similar to Isaiah Simmons in last year’s class, Micah can do it all.

He’s a tackling machine, a threat in the box, and brings solid coverage abilities to the table. Personally, I firmly believed that with a strong season in 2020-21 he could have been a candidate as a top 5 pick. Instead, Micah chose to opt-out for the greater good of his child and the rest of his family. So, Micah will now turn his attentions to training for the NFL Draft, where he will still be picked early with solid combine and pro day showings.

Just How Good Is Micah?

Micah has been an absolute beast since showing up to University Park. In his freshman year, Micah put up pretty solid numbers with 82 tackles, 4.0 TFLs, 1.5 sacks, and 2 Forced Fumbles. Micah’s biggest gain from that season was his experience on the field and the knowledge he gained on how to develop further as a linebacker who can do it all. Then, last season, he EXPLODED.

Micah had 109 tackles, 14 TFLs, 5 sacks, 4 Forced Fumbles, and 2 Fumble Recoveries. He finished 3rd in the Big Ten in tackles, 6th in Solo tackles, 2nd in assists and 10th in TFLs. He was highly regarded, but his performance in the Cotton Bowl launched him to superstardom. Parsons ended up with a stat line of 14 tackles, 2.0 sacks, 3 TFLs, and 2 forced fumbles. Parsons blew the college football world away and has already solidified himself as a future star in the NFL.

How Micah Could Fit With The Jets

Micah Parsons is the kind of player who could be the captain of the defense for the next 15 years. As a linebacker hybrid, he would add a similar value to what Jamal Adams brought to the team. Micah would be a building block as a leader for the long term. It would also make the possibility of moving C.J. Mosley a lot more feasible. The Jets would be able to free a load of cap and have a future leader with the Parsons move.

Obviously, a lot of things would need to fall the right way for Micah to be wearing the Green and White, but hypothetically, he could make sense in the organization. My only worry with any future defensive piece is he may overplay his contract worth, and the team may continue to flounder, and the Jets would have another Jamal situation on their hands.