Jets hint at bright future with hard-fought finale against Buffalo 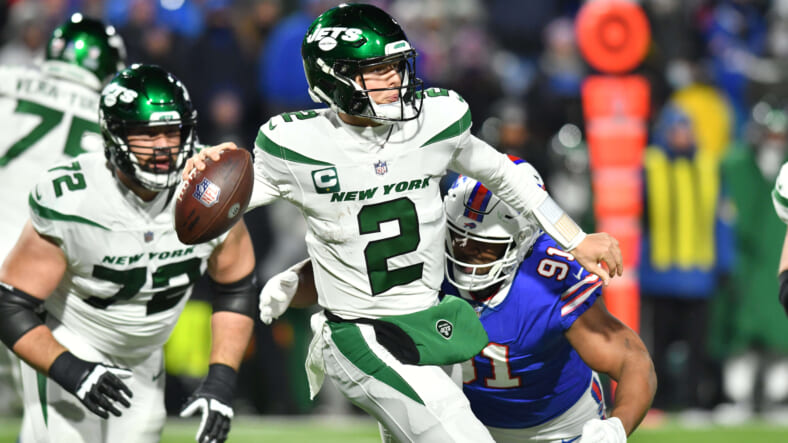 The Jets faced the AFC East champions on Sunday with a surprising result. The final score was expected. Robert Salah’s team played hard for the majority of the game, hinting at a bright future.

Starting with the positive, the defense held Josh Allen and the Bills offense in check for extended periods of time. At one point in the 3rd quarter, Allen was 2 out of his last 10 attempts. Allen ended the day 24 of 45 for 239 yards and 2 touchdowns. Stefon Diggs had a big day with 9 catches for 81 yards and a score.

The Jets’ defensive backfield was the youngest in the league at the start of the season. The cornerback unit had only started 9 games before this season. All of those young players were on the field for a lot of time for the entire season.

The Jets managed no sacks in the game, 5 quarterback hits, and only 4 tackles-for-loss. The Jets defense will want to upgrade the front 7, especially the linebacker unit. Most observers would say the defensive line is a strength that you can build the defense around.

The negative side was the offense. Zach Wilson’s play inspired no confidence whatsoever. Wilson was sacked 8 times for 79 yards, and more than a few were his fault. Wilson drifted deep and outside the pocket consistently all game long. Keelan Cole was his leading receiver, and Jamison Crowder left with injury.

The rushing game was another low point for the Jets. Facing a top Bills defense, they only managed 48 yards on the ground. Michael Carter and Tevin Coleman had good plays here and there, but they were working uphill all day.

Bills punter Matt Haack largely had an awful day. He had not been called on the prior 23 drives of the Bills offense. With 5:40 to go in the 2nd quarter, Haack shanked a punt for 28 yards. Offsetting fouls allowed the Bills to punt again, and Haack shanked another punt for 21 yards. He punted again 2 minutes later, with a 22-yard result. When Haack then punted a ball for a touchback, an audible cheer happened every successful punt thereafter. He did later manage to bobble the snap, got away from the rush, and pooch punt it for 8 yards.

Another interesting special teams tidbit from the Bills was that returners Micah Hyde and others would let the punt bounce before fielding the ball. They would act as if the returning team wanted to stay away, let it hop, grab it and run upfield. Hyde did this on 3 returns for 29 yards. The weather may have been a factor, and it was unique to see.

The Jets have 2 top-10 draft picks and the 4th most salary-cap space. Joe Douglas and the front office are poised to have another impactful off-season. Many players got their chance to put a lot on film this season. The Jets can look forward to the next seven months of team building.