Did the New York Jets find their next Bilal Powell in La’Mical Perine? 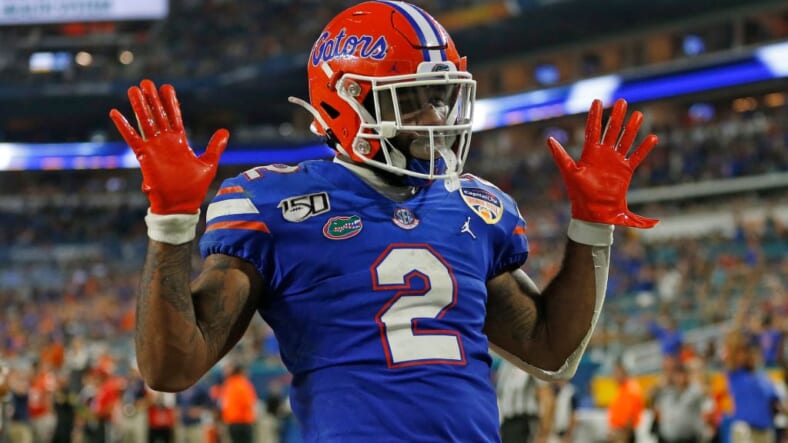 MIAMI GARDENS, FL – DECEMBER 30: Lamical Perine #2 of the Florida Gators celebrates after scoring a touchdown against the Virginia Cavaliers at the Capital One Orange Bowl at Hard Rock Stadium on December 30, 2019 in Miami Gardens, Florida. Florida defeated Virginia 36-28. (Photo by Joel Auerbach/Getty Images)

What are the New York Jets getting in La’Mical Perine?

Perine is an interesting player, who can contribute in a similar role to Bilal Powell in recent years. He is a do-it-all running back and can hold his ground in pass protection. While the Florida product isnâ€™t explosive in any category, he does everything at an average level, which makes him a solid back up for the future. Learning from a player like Frank Gore could do him some good, and they might be expecting him to take a significant jump in 2021 after Gore and his one-year deal expires.

Going into the 2020 NFL draft, Perine was noted as having a prototypical size at the position, a great personality, high character, and has good vision when choosing his running lanes. However, he is a little monotonous and fails to explode through the hole, giving linebackers an opportunity to stop him before reaching the second level. His lateral quickness is a bit underwhelming and tends to rely on power rushes up the gut.

Nonetheless, Perine was a solid contributor for Florida in 2019. Over 131 carriers, he totaled 677 rushing yards and six touchdowns. He was also among the teams top pass catchers, logging 40 receptions, 262 receiving yards, and 6.6 yards per catch. He also earned five receiving touchdowns in 13 games.

Overall, he contributed in multiple facets, giving the Jets an all-purpose back with plenty of untapped potential. I fully expect him to sit in a developmental role in 2020, learning from two of the best running backs in the NFL, one of whom a Hall of Fame pedigree.

This will be a fantastic opportunity for Perrine to work on his weaknesses and emerge as a solid back up to Leâ€™Veon Bell in the future.