Did the Jets stumble upon a stud in mid-round running back selection? 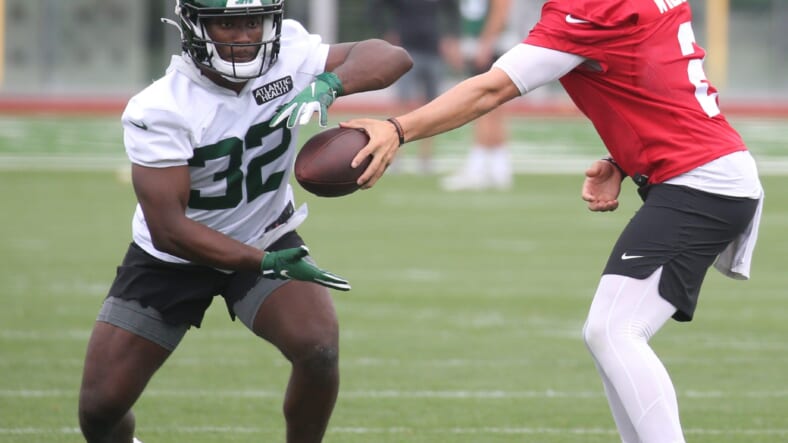 The New York Jets donâ€™t have a clear-cut starting running back, but rookie Michael Carter out of UNC already has the advantage to be the opening day option for Zach Wilson in the backfield. Last year in 2020, Carter posted 1,245 yards and nine rushing touchdowns, including 267 receiving yards and two receiving touchdowns.

As one of the most productive running backs in the country, nobody anticipated Carter falling to the 4th round. Jets management waited patiently for Carter to fall as they sat with their eyes glued to the screen as every team passed him by.

Having sweated the entire third round in hopes Carter would be available, general manager Joe Douglas stated they would have had a serious discussion taking him in the 3rd, but thankfully, he fell right into their laps and is already penciled in as a potential starter come Week 1.

Projected running back room for the Jets:

Carter has already gained the majority of first-team reps during OTAâ€˜s, but the anticipation is that Robert Saleh will execute a rotation of running backs this upcoming year, especially with the signing of Tevin Coleman.

A committee-based approach would help Carter find his sea-legs at the NFL level, easing him into a more physical and athletic league. Heading into the draft, Carter’s strengths included solid agility, vision of the field, and protecting the football efficiently. The UNC product hasnâ€™t fumbled in two years, and most of his negatives include diagnosing running lanes and a lack of top-end speed.

Breakaway speed for running backs is more of a luxury than a necessity, as finding running lanes and picking up first downs is more beneficial than blowing the top off of defenses at the second level. Plenty of backs with average speed produce above-average play. Some examples include Joe Mixon, Nick Chubb, Aaron Jones, Chris Carson, etc.

Ultimately, if Carter can improve his vision and ability to hit holes with confidence, the Jets could have themselves a steal in the mid-rounds. He is a player to have a close eye on during training camp, gauging his snap count with the starters.